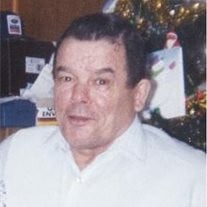 Alfred Ladue, (Junior), 77, of the Seymour Rd., Chateaugay died Friday, Dec. 2 at his home surrounded by his loving family and Hospice of the North Country. He was born in Altona on Feb. 8, 1934, the son of the late William and Blanche (Clark) Ladue. He attended the area school in Altona. He served in the U.S. Army and was honorably discharged in Nov. 1957. He was united in marriage to the former Myrtle (LaValley) Ladue on Aug. 3, 1965 in St. Patrick's Church in Chateaugay by Msgr. Skelly. He worked in different places, the Stone Quarry in Plattsburgh, in the woods, on the Airport in Plattsburgh, and the Seaway before his employment for McCadam Cheese Co. in Chateaugay. He retired from McCadam after 32 years due to health issues. He also owned and operated the family farm with his wife for 21 years. Alfred loved hunting with his good friend, John Beckett and his daughter, Darlene. His favorite saying was, "brown's down!" He loved visiting with family and friends, no matter where they lived. He'd always make his rounds. He also enjoyed spending time with his grandchildren. He was a communicant of St. Patrick's Church. Survivors include his loving and devoted wife of 46 years, Myrtle of Chateaugay; one daughter and son-in-law, Darlene and Kevin Richards of Chateaugay; one son, Alfred (Alfie) Ladue of Mooers Forks; two grandchildren, Nicholas and Haley Ladue of Mooers Forks; one brother, Carl Ladue and his wife, Shirley of Chazy; one sister-in-law, Faye Ladue of Texas; one brother-in-law, Carl Munson of Chazy; and several nieces and nephews. He was predeceased by his parents; two brothers, Harold and Earl Ladue; and four sisters, Pearl Munson, Doris LaBarge, Joyce Manor, and Pauline Provost. Calling hours will be held at the Chateaugay Funeral Home on Tuesday, Dec. 6 from 11 am to 12:30 pm with prayer service at 12:30 in the funeral home, family remarks will follow with committal at 1:30 pm in St. Patrick Cemetery, Chateaugay. The family wants to thank everyone for their thoughts and prayers and request private time following the funeral. Burial will take place at St. Patrick's Cemetery, Chateaugay. Arrangements are with the Chateaugay Funeral Home. Online condolences may be given at www.chateaugayfuneralhome.com.

Alfred Ladue, (Junior), 77, of the Seymour Rd., Chateaugay died Friday, Dec. 2 at his home surrounded by his loving family and Hospice of the North Country. He was born in Altona on Feb. 8, 1934, the son of the late William and Blanche (Clark)... View Obituary & Service Information

The family of Mr. Alfred J. Ladue created this Life Tributes page to make it easy to share your memories.

Send flowers to the Ladue family.