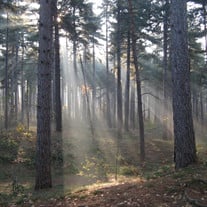 Alton L. (Bud) Durkee, 82, of Chazy Lake, passed away peacefully on Saturday, March 20th at the home he built surrounded by his family. Born in Churubusco in 1938, he was the son of Alton and Mary (McArdle) Durkee. He was married to Gertrude (Gert) Tebo in September 1960 in Malone. Although health struggles progressively slowed his body down over the last 20 years, he will be remembered for his ability to fix or build almost anything. From carpentry, refrigeration, electrical, engines, welding and more, he had a strong work ethic and skills that he willingly shared with others and passed along to his two daughters. He loved Jeopardy and did the crossword puzzles and jumbles in pen. He was happiest when he was “puttering” in the garage or out in the woods with a chainsaw in his hands. He wouldn’t admit it, but he also loved the family pug, Peanut. He graduated from Chateaugay Central School in 1955 and went on to serve in the United States Army in 1955 and was honorably discharged in 1958. He started with the NYS Department of Corrections in 1960 and retired as a Lieutenant in 1992. Bud is survived by his wife of 60 years, Gertrude (Gert); two daughters, Deborah Fletcher and her husband Mark of Cobleskill, NY and Stephanie Patrick and her husband Stephen of West Chazy, NY; four grandsons Matthew Fletcher, Nickolas Fletcher, Andrew (AJ) Fletcher and Paul Sweeney; a great-grandson, William Fletcher; a sister, Mary Ann Pezzulo from York, PA; and several nieces and nephews. He was predeceased by his parents, Alton and Mary as well as his sister, Patricia Ranck. Funeral services will be private and at the convenience of the family. Spring burial will be held in Immaculate Heart Cemetery, Churubusco A celebration of life for family and friends will be held at a later date. Donations in Bud’s memory may be made to the Dannemora Fire Department. The family would like to thank Hospice of Northern New York (Katie, Shelley, Becky, Heather) for their support and care over the last month. It was important to Bud to come home and rest peacefully and with their help, we were able to make it possible. We would also like to thank Father Reamer from CVPH for his service.

Alton L. (Bud) Durkee, 82, of Chazy Lake, passed away peacefully on Saturday, March 20th at the home he built surrounded by his family. Born in Churubusco in 1938, he was the son of Alton and Mary (McArdle) Durkee. He was married to Gertrude... View Obituary & Service Information

The family of Mr. Alton "Bud" Durkee created this Life Tributes page to make it easy to share your memories.

Send flowers to the Durkee family.