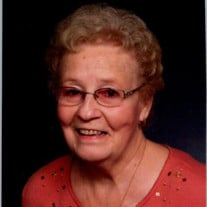 Anita B. (Trombley) McCann, 91, of East Main St., Chateaugay, died Thursday, September 9, 2021 at the Alice Hyde Medical Center, Malone. Born on August 1, 1930 in Churubusco, NY, she was the daughter of Armand J. and Doria J. (Tremblay) DeCosse. She was married to Ross P. Trombley on August 19, 1950 in St. Michael’s Church, Battleboro, VT by Rev. James J. Murray. He predeceased her on April 22, 2008. Her second marriage was to Hugh P. McCann on May 16, 2015. He predeceased her on May 17, 2021. Anita graduated from Chateaugay High School in the class of 1948. In 1954, she and Ross purchased the family farm and she helped Ross run it until they retired in 1985, when they moved into the village of Chateaugay. She was a communicant of St. Patrick’s Church, Chateaugay. She is survived by her two sons and daughters-in-law, Russell and Ronna Trombley of Chateaugay, Kevin and Melissa Trombley of Chateaugay; three daughters and a son-in-law, Catherine and William Poupore of Churubusco, Ann Mills of Chateaugay, Diane Trombley of Saratoga Springs; a step-son and his wife, Thomas and Monique McCann of Whippleville; eight grandchildren, Gregory Poupore, Michelle Wilkinson Dion, Jessica and Jason Trombley, Derrick and Tyler Mills, Miranda O’Neill LaFountain, Emily Trombley; seven great-grandchildren, Christian Wilkinson, Rhylee Poupore, Kayleigh Biglow, Briana and Evan Trombley, Clark and Floyd Mills; two step-granddaughters, Erynne and Ashlyn McCann; three sisters, Helen Decoste, Shirley Barcomb, and Joanne Barcomb as well as several nieces and nephews. Besides her husbands, she was predeceased by her parents; a son, Mark Trombley; a brother, Gerald DeCosse; and two sisters, Pauline Barcomb and Annette Trombley. Calling hours will be held at the Chateaugay Funeral Home on Sunday, September 12, 2021 from 3 p.m. to 6 p.m. A Mass of Christian Burial will be celebrated on Monday, Sept. 13 at 11 a.m. at St. Patrick’s Church. Burial will take place at Immaculate Heart Cemetery, Churubusco. Donations in her memory may be made to the Chateaugay American Legion, St. Patrick’s Church or the Chateaugay Fire Dept.

The family of Mrs. Anita B. (Trombley) McCann created this Life Tributes page to make it easy to share your memories.

Send flowers to the McCann family.