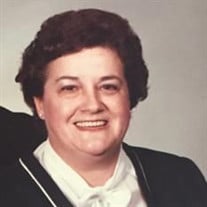 Annette Anna (Decosse) Trombley,87, passed away peacefully on Tuesday, February 28, 2017 at Massena Memorial Hospital in Massena, New York. She was born on March 25, 1929 in Churubusco, New York to Armand and Doria (Tremblay) Decosse. She attended school in Chateaugay, New York. On August 22, 1950, she married Clarence Trombley of Ellenburg, New York who predeceased her November 09, 2002. Mrs. Trombley worked with her husband on their dairy farm in Chateaugay for many years where she enjoyed gardening. She was a long time communicant of St. Patrick’s Church in Chateaugay until she moved to Massena. After her husband passed, she moved to Laurel Terrace in Massena to be near her daughter, Mae. She later became a resident of Highland Rehabilitation Center in Massena where she enjoyed arts and crafts, bingo, music events and church services. Mrs. Trombley was predeceased by her devoted husband, Clarence, her loving daughter, Mae Cooke, her brother, Gerald Decosse, her sister-in-law, LeatriceDecosse, her sister, Pauline Barcomb, her brother-in-law, Jacques Barcomb, her sister-in-law, Irma Kerry, her sister-in-law, Marcella Trombley and brother-in-laws, Howard Trombley, Leon Trombley, Ross Trombley and Roma Decoste. She leaves one son, Jay Trombley and his wife, Veronica, from Colchester, CT, a daughter, Deborah Bastien and her husband, Raymond, and their son, Jordan, from Griswold, CT, her granddaughter, Danielle Clute and husband, William, and their children Jenna, Jacob and Marissa and her grandson, Randall Trombly and his wife Michelle and their children Hailey, Kiah, Jace and Noah. Mrs. Trombley also leaves behind her sister, Anita Trombley McCann and brother-in-law, Hugh McCann, her sister, Helen Decoste, her sister Shirley Barcomb and brother-in-law, Lionel Barcomb, her sister, Joanne Barcomb and brother-in-law, Reginald Barcomb, and sister-in-law, Bernice Trombley, as well as a number of nieces and nephews. Calling hours will be held at the Chateaugay Funeral Home on Friday, March 3, 2017 from 4 to 7 pm. The funeral will be held at St. Patrick’s Church in Chateaugay on Saturday, March 4, 2017 at 10 am. Entombment will take place at Whispering Maples Memorial Gardens in Ellenburg Depot. In lieu of flowers, memorial contributions in Mrs. Trombley’s name may be made to St. Patrick’s Church or the American Heart Association, P.O. Box 417005, Boston, MA 02241-7005. Arrangements are with the Chateaugay Funeral Home. Online condolences may be offered at www.chateaugayfuneralhome.com.

The family of Mrs. Annette Anna Trombley created this Life Tributes page to make it easy to share your memories.

Send flowers to the Trombley family.