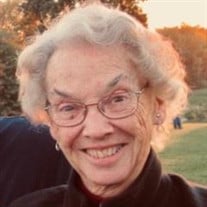 The Cook family is sad to announce the passing of Barbara F. Cook, 91, of Chateaugay. Barbara passed peacefully on Saturday, May 22, 2021 at The Alice Center, Malone. Born on Oct. 20, 1929 in Malone, NY, she was the daughter of Ralph and Grace (Tobey) Foote. She is predeceased by her sister Marjorie (Young) and brother Gerald. She was married to Olin M. Cook on Aug. 28, 1954 at the Congregational Church in Malone by Rev. Ronald Rowat. They traveled extensively together after Olin's retirement and celebrated their 66th wedding anniversary in August 2020. He predeceased her on Dec. 12, 2020. Barbara attended Flanders School in Malone and graduated from Franklin Academy, Malone. She attended the Adirondack Business School and was employed for several years for Franklin Academy. Barb was a member of the First Presbyterian Church in Chateaugay and Eastern Star and volunteered for many years at the Alice Hyde Hospital. Devoted to her family and community Barb could be seen lending a hand at the various Town functions, taking in a school concert or a movie at the Town Hall Theatre. A sense of humor that stayed with her until her death, Barb always saw the positive and good in all situations. A consummate gardener for many years, Barb was pulling prize sized zucchini from her garden right up until last summer. A loving wife, mother, and grandmother, Barbara is survived by her two sons and daughter-in-laws, Tobey and Margaret of Strongsville, OH and Donald and Denise of Simi Valley, CA and four grandchildren, Isaac, Amanda, Michael and Adam, and nephew Robert Young, a Malone native. Besides her husband she was predeceased by her parents, siblings, and granddaughter, Kristin. A graveside service will be held on Saturday, May 29 at 2 p.m. at Eastside Cemetery, Chateaugay with Rev. Dean Chapman officiating. Donations in her memory may be made to the First Presbyterian Church, Chateaugay Central School, Chateaugay Memorial Library or the Chateaugay Historical Society.

The Cook family is sad to announce the passing of Barbara F. Cook, 91, of Chateaugay. Barbara passed peacefully on Saturday, May 22, 2021 at The Alice Center, Malone. Born on Oct. 20, 1929 in Malone, NY, she was the daughter of Ralph and Grace... View Obituary & Service Information

The family of Mrs. Barbara F. Cook created this Life Tributes page to make it easy to share your memories.

The Cook family is sad to announce the passing of Barbara F....