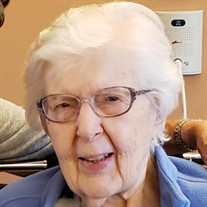 Barbara T. Dreez, 90, of Malone, passed away Thursday, June 16, 2022 at the Alice Center, Malone. Born on June 4, 1932 in Queens, NY, she was the daughter of John and Betty (Roder) Rest. She was married to Otto Dreez on April 24, 1954 in Woodside, NY. He predeceased her on March 12, 1980. Barbara worked as the head of the admitting department at the Alice Hyde Medical Center. She was a communicant of St. Francis of Assisi Church, Constable. She enjoyed traveling and spending time with her close friend, Aggie, the two were partners in crime. Barbara is survived by her son and daughter-in-law, Michael and Pam Dreez of Goldsboro, NC; a nephew, Larry Foerster of Wurtsboro, NY; and close friends, Carmen and Tommy Maloney of Burke. Besides her husband, Barbara was predeceased by her parents. A graveside service will be held at St. Francis of Assisi Cemetery, Constable on Monday, June 20, 2022 at 2 p.m. In lieu of flowers, donations in Barbara’s memory may be made to the Malone Adult Center.

The family of Mr. Barbara T. Dreez created this Life Tributes page to make it easy to share your memories.

Send flowers to the Dreez family.