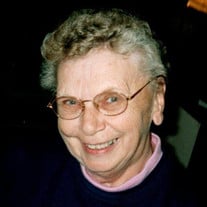 Beverly K. Trull Dickenson, 81, of Constable died Sunday, February 2, 2020 at her home, surrounded by her loving family. Born Beverly D. Kehrer on April 24, 1938 in Syracuse, NY, she was the daughter of John Benjamin and Phoebe Mae (Mosher) Kehrer. She graduated from Tully Central School with the Class of 1956. She married Nathaniel W. Trull, Jr. on April 13, 1957 in Cuyler, NY. He predeceased her on July 27, 1975. She then married Robert E. Dickenson on April 20, 1997. He predeceased her on February 15, 1998. Beverly was an active member of Chapter #64 Vermont and Frontier Chapter #203 Order of the Easter Star. She was also a member of the Constable Methodist Church. The light of her life were her grandchildren and great-grandchildren. Beverly enjoyed following her grandchildren’s many sporting and school events. She was an LPN. She also was employed at Mills Restaurant, Chateaugay for many years and retired from Henry’s Pools and Spas, Malone. She is survived by her four children, Phillip (Beth) of Kingsland, GA, Joanne Harris of Syracuse, Brenda (Dick) Cook of Chateaugay and Natalie (Mark) Grimshaw of Bangor; grandchildren, Michele Penley, Nathaniel (Becky) Trull, Lindsay (Miranda) and Brandon (Phylicia) Harris, Jarrod (Kelsey), Marissa, Hannah and Alicia Cook, Ashley (Matt) and Angela Grimshaw, Erin (Tom) Page; great-grandchildren, Keona, Lilla, Liam, Quintin, Scout and Vayda. Besides her husbands, she was predeceased by her parents; two brothers, Edwin Kehrer and Harold Kehrer in infancy; sisters, Norma Waters and Audrey Carlton. Calling hours will be held at the Chateaugay Funeral Home on Friday, February 7 from 4 to 7 p.m. The Eastern Star service will be held at 6:30 p.m. A funeral service will be held at 11 a.m. on Saturday, February 8 at the Chateaugay United Methodist Church with CLM Cora Smith officiating. Spring burial will take place at Grandview Cemetery, Charlotte, VT. Donations in her memory may be made to the Order of the Eastern Star Frontier Chapter #203 in New York or Chapter #64 in Vermont or the Constable Fire Dept.

The family of Mrs. Beverly K. Trull Dickenson created this Life Tributes page to make it easy to share your memories.