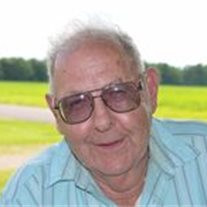 Buddy Lee Rust, 73, of County Rt. 33, Burke died Tuesday, Nov.24, 2015 at his home surrounded by his loving family. Born in Burke, NY on March 27, 1942 in his family home, he was the son of George and Gertrude (Perham) Rust. He was married to Martha A. Barse on November 25, 1965 at St. Joseph's Church in Bombay, NY by Father Sharland. Buddy owned and operated the family farm, Rockland Farms in Burke for many years. He had many different jobs over the years in construction and factory work. He worked for Chateaugay Central School as a cleaner until his retirement in 2012. He was an avid outdoorsman who enjoyed trapping, fishing, baseball, softball, country music, dancing, gardening, playing cards and spending time with family and friends. Buddy is survived by his wife of 50 years; six children, Carmon D. Rust and his wife, Julia of Peru, Lorraine J. Childs and her husband, Scott of Chateaugay, Dennis G. Rust of Bloomingdale, Colin M. Rust and his wife, Diane of Norcross, GA, Corrinne V. Davio and her husband, Terry of Poultney, VT, Alayana M. Rust and her companion, Ron Whaley of Brainardsville; a sister, Juanita Bracy of South Kent, CT; eight grandchildren, Joel Bessette and his wife Kelly of Radford, VA, Aaron Bessette of Chateaugay, Andrew Rust of USAF Germany, Hayden Childs of Chateuagay, Elise Davio of Poultney, VT, Michael Ledger and his wife, Maribeth of Malone, Mathew Turner and his wife, Abbey of Peru, Rebecca Turner of Burlington, VT; several nieces and nephews. He was predeceased by his parents and a sister, Cathleen McPherson There are no calling hours. Services will be private and at the convenience of the family. Burial will take place at Eastside Cemetery. Donations in his memory may be made to Hospice of the North Country or the American Cancer Society.

The family of Mr. Buddy Lee Rust created this Life Tributes page to make it easy to share your memories.

Send flowers to the Rust family.