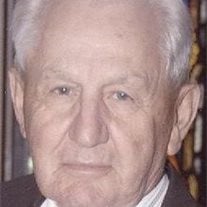 A twin son born to the late Albert and Emma (Rock) Nephew entered into the hands of the Lord on Easter Sunday, April 20th at the age of 91. Carl J. Nephew born on September 22, 1922 in Mooers Forks, New York has joined his beloved wife, Catherine whom passed on July 26th, 2012 and they will be together once again for eternity. The couple were married in St. Ann's Church in Mooers Forks on September 9th, 1944. Carl came from a family of 18 of which he was able to enjoy his siblings of 14 living members for many years. He leaves behind his daughter, Judy and son-in-law Donald Bombard of Ellenburg Depot and a grandson, Scott Bombard and his wife Shelley also of Ellenburg Depot. His great-grandsons Tommy, Steven and Corey he accepted with love into the family and recently a great-great grandchild, Lily Ann who he looked forward to seeing. A lone sister, Eva Drown of Mooers, N.Y. still resides. He attended school at Mooers Central and worked on the family farm growing up in his teenage years. Carl was a self employed contractor for many years and always proud of the work he did when work was done and someone who took such great care of his equipment of which many can tell you. Those who have predeceased him are his wife, infants Wayne and Donna; brothers and sisters-in-law Leo (Pearl) Nephew, Wilmer (Nina) Nephew, Earl (Dora) Nephew, twin Harold (Louise) Nephew, Richard (Clara) Nephew and sisters and brothers-in-law Irene (Stanley) Saunders, Lillian (Thomas) Robinson, Bertha (Henry) Provost, Pearl (Theron) Ash, Delsie (Earl) Begor, Charles Drown, Stella Sheehy, Ruby (Richard) Goodell, a set of boys, twins died at birth and two girls. In the year of 1950, Carl and his wife Catherine moved to Route 11 in Ellenburg Depot where they made their home for the past several years. Two of their children were taken away from them at a very young age due to chronic illnesses. Carl has missed his wife tremendously for the past two years and would tell many he came in contact with that she was the most beautiful girl and that is why they enjoyed 68 years of marriage before she was called home. He was a communicant of St. Edmund's Church for many years and usher at the 8:00 am mass as he felt that was his responsibility. He was a very active Knights of Columbus member of Fr. Augustus J. Dumont #4441 Ellenburg and a fourth degree member of the Malone Council Our Lady of Victory Assembly #771 also a past member of the Ellenburg Depot Fire Dept. He called Bingo in Ellenburg for many years at St. Edmund's Parish Center. He enjoyed many sports as having been active in bowling leagues, horseshoe tournaments and golfing in the north country. He loved to travel and going to the casinos. His love of Fords and NASCAR he always looked forward to a race on the weekend. He was a person who always liked to win no matter what he was involved in, especially at playing cards as he was very competitive. His words to many as they can recall him saying were "right on", "don't tell me", "Scotty, my boy" and "you can't tell your elders what to do." To KDU unit a very sincere thank you for taking care of Carl for the past 3 years as with the kidney failure so late in life he was a fighter right to the end and did not want to give up as so much determination and so witty as so many stories he liked to tell of the old days and how rough things were back then. Anyone could sit for hours and listen to him as his nieces and nephews would recall they did. He was very grateful to them for spending their valuable time. The Chateaugay Funeral Home is in charge of arrangements where visiting hours will be from 3 pm to 7 pm on Wednesday, April 23rd with the funeral to be at St. Edmund's Church on Thursday, April 24th at 11:00 A.M. Donations may be given to St. Edmund's Church c/o the Carpet Fund or to the Ellenburg Depot Fire Dept.

A twin son born to the late Albert and Emma (Rock) Nephew entered into the hands of the Lord on Easter Sunday, April 20th at the age of 91. Carl J. Nephew born on September 22, 1922 in Mooers Forks, New York has joined his beloved wife, Catherine... View Obituary & Service Information

The family of Mr. Carl J. Nephew created this Life Tributes page to make it easy to share your memories.

A twin son born to the late Albert and Emma (Rock) Nephew entered...

Send flowers to the Nephew family.