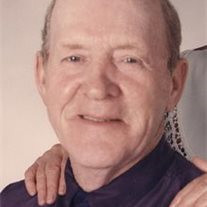 Carmen Franklin Merrill, 90, of Truman Ave., Plattsburgh passed away Saturday, May 25, 2013 at CVPH Medical Center, Plattsburgh, NY with his family by his side. Born in Merrill, NY on March 1, 1923, he was the son of Harry and Mary (Dellinger) Merrill. He was married to his loving wife, Dorothy LaPoint Merrill on January 24, 1948 in St. Bernard's Church, Lyon Mountain, NY. Carmen attended Lyon Mountain School. He enlisted in the U.S. Army on April 30, 1943 and served during World War II in the Phillipines. He also served with the Military Police. He was honorably discharged on April 9, 1946. In his early years, he was employed by the Lyon Mountain Mines and later by Metropolitan Oil Company as a tractor trailer driver. He retired after 31 years of service. Carmen had a love for all animals and the outdoors. He was an avid hunter and fisherman. He was a very special man and had a great love for his family, especially his wife. Carmen raised a bear cub, red fox and many raccoons. He loved playing the accordian and whipping people at lawn jarts and taking their dimes. Carmen is survived by his wife of 65 years; a daughter and son-in-law, Joanne and Rick Patnode of Merrill; a son and daughter-in-law, Ron and Joan Merrill of Plattsburgh; grandchildren, Scott LaFlesh and his wife, Tia of Champlain, Tricia and Michelle Merrill of Plattsburgh; six great-grandchildren; a brother and sister-in-law, Edward and Peg Merrill of Newark, NY; a sister and brother-in-law, Phyllis and Don Rouse of Atlanta, GA; a god-son, Todd LaMere of Plattsburgh; sisters-in-law, Penny Merrill of Macedon, NY, Flora St. Louis of Plattsburgh, and Pearl Ashline of Plattsburgh. He is also survived by his loyal companion, dog Brandon. A thank you to a special nephew, Dan and his wife, Brenda and nieces, Judy, Jerri, and Elaine. He was predeceased by his parents; a daughter, Lorraine Ann Merrill; sisters, Doris, Irma and Ada; brother, Albert and son-in-law, Darrell LaFlesh. There are no calling hours. A graveside service will be held at 11 am on Monday, June 3 in St. Bernard's Cemetery with Rev. Ted Crosby officiating. A reception will follow at the Mae Currier Building on the Tom Miller Rd, Plattsburgh. Donations in his memory may be made to Elmore's SPCA or Adirondack Humane Society. The family would like to extent special thanks to Dr. McCullum and other staff at CVPH for the wonderful care. To a remarkable dad: a special memory from his daughter, Joanne for all the love and priceless gifts he has given me. I thank you from the bottom of my heart!

Carmen Franklin Merrill, 90, of Truman Ave., Plattsburgh passed away Saturday, May 25, 2013 at CVPH Medical Center, Plattsburgh, NY with his family by his side. Born in Merrill, NY on March 1, 1923, he was the son of Harry and Mary (Dellinger)... View Obituary & Service Information

The family of Mr. Carmen Franklin Merrill created this Life Tributes page to make it easy to share your memories.

Send flowers to the Merrill family.