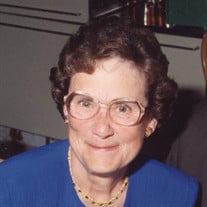 Carol C. Walton, 87, of Stuart Ave., Chateaugay died Wednesday, January 25, 2017 at her home surrounded by her loving family. Born on Dec. 28, 1929 in Bellmont, NY, she was the daughter of Clayton and Amelia (Richey) Cheyne. She was married... View Obituary & Service Information

The family of Mrs. Carol C. Walton created this Life Tributes page to make it easy to share your memories.

Send flowers to the Walton family.