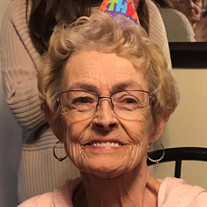 Carol M. Wood, 78, of Burke, passed away Tuesday, June 1, 2021 at her home surrounded by her loving family and aided by Hospice of the North Country. Born on April 7, 1943 in Chateaugay, NY, she was the daughter of J. Kenneth and Bernice (McClatchie) Earl. Carol was a homemaker working for many years on the family farm and the family maple sugaring business, Wood’s Maple Products. In later years, she worked for Chateaugay Central School, the American Village Dry Cleaners in Malone and then at Franklin Correctional. She was an avid knitter, making many beautiful creations that she loved to gift to family and friends. She was known to some as a professional shopper always on the hunt for something special. She enjoyed preparing and cooking meals for her family and friends. She enjoyed spending time with her grandchildren and great-grandchildren and loved visiting with friends and family. For 35 years, she was a proud sponsor and advocate for A.A., she valued being able to help others overcome their obstacles and succeed in life. She was member of the Chateaugay United Methodist Church and was a member of the Frontier Chapter #203 Order of the Eastern Star. Carol is survived by her four children, William Wood and his wife, Brenda of Burke, Kathy LaBare and her husband, Rick of Chateaugay Lake, Robert Wood of Baltimore, MD, Donna Petrashune and her husband, Glenn of Chateaugay Lake; nine grandchildren; three great grandchildren; a sister, Kay Fall of Malone; as well as several nieces and nephews. She was predeceased by her parents, Kenneth and Bernice as well as a brother, James Earl. At Carol’s request there will be no calling hours. A memorial service will be held on Monday, June 7, 2021 at 1 p.m. at the Chateaugay United Methodist Church. Donations in Carol’s memory may be made to the Burke Adult Center, Hospice of the North Country or the Constable Fire Department.

Carol M. Wood, 78, of Burke, passed away Tuesday, June 1, 2021 at her home surrounded by her loving family and aided by Hospice of the North Country. Born on April 7, 1943 in Chateaugay, NY, she was the daughter of J. Kenneth and Bernice (McClatchie)... View Obituary & Service Information

The family of Mrs. Carol M. Wood created this Life Tributes page to make it easy to share your memories.

Send flowers to the Wood family.