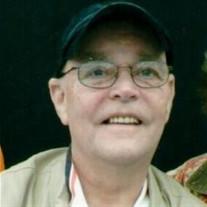 Charles Walter Gardner, "Chuck", 71, of Pine Dr., Constable died Tuesday, April 2, 2019 at his home surrounded by his loving family and aided by Hospice of the North Country. Born on May 30, 1947 in Canandaigua, NY, he was the son of Harry Wilkinson Gardner and Jean (Maloney) Santimoor. He was married to Joyce Fitzgerald on July 1, 1967 in St. Joseph’s Church, Malone by Msgr. Brennan. Charles graduated from Franklin Academy and the Rochester Business Institute. He was employed by Niagara Mohawk Power Company, retiring after over 30 years of service. He was a member of the Church of Jesus Christ of Latter Day Saints. Charles was a justice of the peace, councilman, town supervisor for over 20 years and pastor of the First Congregational Church in Hopkinton for 34 years. He had a love of travelling, his golden retrievers, antiquing, and automobiles. The light of his life were his three grandchildren. He is survived by his wife of 51 years, Joyce (Fitzgerald) Gardner; two sons, Scott Charles Gardner of Constable, Todd Charles Gardner and his wife, Shazana Gardner of Galt, CA; a daughter, Erin Marie Coons and her husband, Jeffrey of Colchester, CT; three grandchildren, Madison Elise Coons of Colchester, CT, Liam Evan Coons of Colchester, CT, Owen William Gardner of Galt, CA; a brother, Harry Gardner and his wife, Martha of Constable; several nieces and nephews. He was predeceased by his mother, Jean (Maloney) Santimoor; his father, Harry Wilkinson Gardner; his sister, Beverly (Gardner) LaClair; his step-father, Robert M. Santimoor. Calling hours will be held at St. Mary-Murphy-Wilcox Funeral Home on Sunday, April 7 from 2 to 4 and 6 to 8 p.m. Calling hours will also be held prior to the funeral on Monday, April 8 from 10 to 11:30 a.m. at the Church of Jesus Christ of Latter Saints on the corner of the Brainardsville Road. The funeral service will follow at 12 p.m. Burial will take place in the spring at the Constable Cemetery. Donations in his memory may be made to the Constable Rescue Squad, Hospice of the North Country - Alice Ballard Fund or Dana Farber Cancer Institute, in memory of Charles Gardner to support cancer research and patient care at: P.O. Box 849168, Boston, MA 02284 or www.dana-farber.org/gift.

Charles Walter Gardner, "Chuck", 71, of Pine Dr., Constable died Tuesday, April 2, 2019 at his home surrounded by his loving family and aided by Hospice of the North Country. Born on May 30, 1947 in Canandaigua, NY, he was the son of Harry Wilkinson... View Obituary & Service Information

The family of Mr. Charles "Chuck" Gardner created this Life Tributes page to make it easy to share your memories.