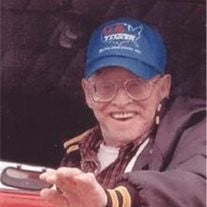 Chester R. Sears, 86, formerly of Churubusco died Wednesday, Aug. 22, 2012 at the Franklin County Nursing Home, Malone, NY where he had been a resident since July 28, 2010. Born in Johnson City, NY on Feb. 27, 1926, he was the son of Robert and Pearl (Carter) Sears. He was married to Catherine Webb on November 26, 1949 in St. James Church, Johnson City, NY. She predeceased him on April 20, 2008. In his early years, Mr. Sears was employed by Endicott Johnson. He owned and operated the Sears and Sons Sawmill, Churubusco, was a dairy farmer, and drove truck for Clinton County Highway. He was Superintendent of Highways for Churubusco for 14 years and a charter member and organizer of the Churubusco Fire Dept. of which he was the first Fire Chief. Mr. Sears was a communicant and caretaker of Immaculate Heart of Mary Church and former board member of Churubusco Senior Housing. He loved working in the woods and enjoyed joking with people. He was a loving husband and father who enjoyed spending time with his grandchildren. Mr. Sears is survived by two daughters, Connie Ryan and her companion, Frenchy Babbie of Ellenburg Depot, Carol Hoenig of Bellmore, Long Island; two sons and a daughter-in-law, Calvin Sears of Churubusco, Carl and Kathy Sears of Brunswick, MD; ten grandchildren and their spouses, Melissa and Paul Maney, Elizabeth & Ryan Beals, Sarah Ryan, Jason Hoenig, Corrie and Matt Asmus, Natasha Hoenig, Trevor and Amanda Sears, Justin Sears and his fiancée, Cheryl Rushford, Tim George and Brad George; three great-grandchildren, Madeline, Raymond and Eileen Maney. Besides his wife he was predeceased by his parents; a sister, Irene Venette; daughter-in-law, Terri Sears. Calling hours will be held at the Chateaugay Funeral Home on Friday, Aug. 24 from 2 to 4 and 7 to 9 pm. Mass of Christian Burial will be celebrated at 1 pm on Saturday, Aug. 25 in Immaculate Heart of Mary Church. Burial will take place at Immaculate Heart Cemetery, Churubusco. Donations in his memory may be made to Churubusco Fire Dept.

The family of Mr. Chester R. Sears created this Life Tributes page to make it easy to share your memories.

Send flowers to the Sears family.