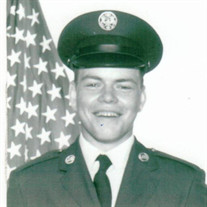 Chris A. Travers, 62, of Webster St., Malone died Wednesday, Nov. 18, 2020 at the Alice Hyde Medical Center, Malone. Born on Dec. 22, 1957 in Malone, NY, he was the son of Henry Travers and Elaine Mayville Lashomb. Chris graduated from Salmon River Central School. He enlisted in the U.S. Air Force in 1976 and was honorably discharged in 1985. Chris was a tractor trailer driver for 17 years. He is survived by his mother, Elaine Lashomb of Malone; his father, Henry Travers and his wife, Dorothy of Malone; his fiancée, Susan Tuper of Malone; a daughter, Christine Travers of North Dakota; two grandsons, Taylor Lysne and Derek Bakken of North Dakota; three siblings, Steven Travers of Malone, Vicki Travers of Croghan, Mark Travers and his wife, Dorothy of Inglis, FL; four step-brothers, Clark Lashomb and his wife, Gail, Glenn Lashomb and his wife, Rosa, Brian McGibbon, Neil McGibbon and his wife, Connie. He was predeceased by his step-father, Wallace Lashomb and two step-brothers, Douglas and Richard Lashomb. Services will be private and at the convenience of the family.

The family of Mr. Chris A. Travers created this Life Tributes page to make it easy to share your memories.

Send flowers to the Travers family.