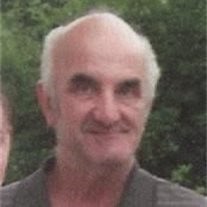 Claude R. Bombard, 65, of Maple Leaf Housing, Uno St., North Bangor died unexpectedly Thursday, June 7, 2012 at Alice Hyde Medical Center, Malone, NY. Born in Malone, NY on July 14, 1946, he was the son of Claude and Bertha (Tebo) Bombard. Mr. Bombard attended Franklin Academy, Malone. He was employed as a truck driver for Sentinel Elm Dairy and Malone Dairy for over 15 years. He returned to farming with the Norman Dean Farm and was employed by several other area farms. He retired from Metcalf Farm, Westville in 2008. Mr. Bombard moved to Maple Leaf Housing in 2008 to make his home. He was a communicant of Notre Dame Church, Malone. He enjoyed helping and supporting his friends but most of all loved spending time with his family especially his grandchildren and great-grandchildren. He was an avid NY Yankee fan. Mr. Bombard is survived by two daughters, Debbie Bombard and her companion, Bruce A. Smith of Burke, Jodi Southworth and her husband, Keith of Westville; two sons, Mark Bombard of Constable, Jim Bombard and his wife, Donna of Constable; 7 grandchildren; 5 great-grandchildren; four brothers and sisters-in-law, Donald and Judy Bombard of Constable, Charles and Jane Bombard of Canton, Leon Bombard of Burke, Joe and Deb Bombard of Burke, Sue Dumas of North Bangor; several nieces and nephews. He was predeceased by his parents; two brothers, Harold and Robert Bombard, and two sisters, Judy Charland and Alice Bombard. Calling hours will be held at the Chateaugay Funeral Home on Saturday, June 9 from 12 to 3 pm. Family remarks will be offered at 3 pm in the funeral home chapel. Burial will take place at West Bangor Cemetery, West Bangor. Donations in his memory may be made to the Bangor Fire Dept and Rescue Squad.

The family of Mr. Claude R. Bombard created this Life Tributes page to make it easy to share your memories.

Send flowers to the Bombard family.