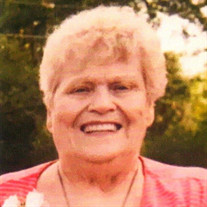 Constance A. “Connie” Ero, 84, of Plattsburgh, passed away peacefully with family by her side on Thursday, August 5, 2021 at CVPH Medical Center. She was born in Plattsburgh, NY on July 22, 1937. She was the daughter of Michael and Mina (LaMountain) Carpenter. She married the love of her life, Paul Richard Ero on March 8, 1978. They enjoyed spending time with each other, especially fishing and camping. After her husband passed in 2009, Connie sold their home in Ellenburg and moved to Beekman towers in Plattsburgh, where she resided for nine years and made numerous friends while participating in the downstairs events and parties. Upon becoming ill, Connie became a resident of the Clinton County Nursing Home where she received exceptional care from the staff. Connie was self-employed through the State of New York – Office of Mental Health as a Family Care provider for 28 years; retiring in 1996. She always enjoyed spending time with her residents, especially on camping trips to Meacham Lake in Malone, NY. She enjoyed playing bingo and taking her chances at the casino. Connie was an exceptional host when it came to holiday gatherings with her family and weekend adventures with her grandchildren. From late evening ringlets to pampering to Sunday brunch and church, it was the simple things that brought joy to Connie’s life. Mrs. Ero is survived by her sister, Irene Fortin; 12 children; 26 grandchildren and several great-grandchildren along with several nieces and nephews. She was predeceased by her parents Michael and Mina Carpenter; her husband, Paul R. Ero; five brothers, Clarence, George, John, Emery and Larry. Per Connie’s wishes, a graveside service will be held at St. Edmund’s Cemetery in Ellenburg Depot, NY on August 24, 2021 at 11 a.m.

The family of Mrs. Constance "Connie" Ero created this Life Tributes page to make it easy to share your memories.

Constance A. “Connie” Ero, 84, of Plattsburgh, passed away peacefully...

Send flowers to the Ero family.