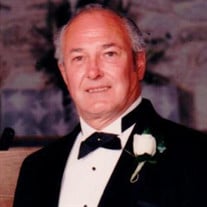 Daniel Leo Paro, 86, of Malone died peacefully April 1, 2020 at the home he built for his family in 1962. Born on Aug. 23, 1933 in Malone, NY, he was the son of Clarence R. and Mary A. (Chauvin) Paro. He was married to Lida Lou Clayton on Oct. 5, 1957 in Morehead, KY. She predeceased him on Feb. 13, 2015. Mr. Paro graduated from St. Joseph's Ursuline Academy with the Class of 1952. He was a proud veteran who enlisted in the US Army on Oct. 27, 1955 and was honorably discharged on June 22, 1957. He also served with the National Guard. He owned and operated D.L. Paro Inc. Excavation Contractors where he put in pipelines for municipalities in Northern New York State. Mr. Paro was a parishioner of Notre Dame Church and a member of the American Legion Post #219, Malone. He was an avid deer hunter and trout fisherman and also enjoyed traveling the world with his wife and family. He is survived by a daughter and son-in-law, Beth and Mike Stoecker of Conroe, TX; a son and daughter-in-law, Daniel Clayton and Sheila Paro of Warner Robins, GA; three granddaughters, Sarah Stoecker, Bronte Stoecker and Tara Rheaume and a great-grandson, Timothy Rheaume. Besides his wife, he was predeceased by his parents; a son, James Benjamin Paro and a sister, Rita Promisel. The family would like to extend their sincerest gratitude to the team of private caregivers, Hospice of the North Country and the U.S. Veterans Administration Medical Services for the care and comfort of their loved one. Services will be privately held. Burial will take place at Notre Dame Cemetery.

The family of Mr. Daniel Leo Paro created this Life Tributes page to make it easy to share your memories.

Send flowers to the Paro family.