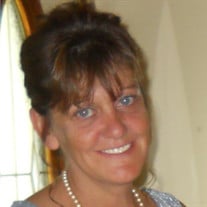 Darlene Marie Bell, “Tootsie”, 55, of the Montgomery Rd., Burke died Saturday, Dec. 23, 2017 at her home surrounded by her loving family after a courageous three year battle with cancer. Born on June 23, 1962 in Malone, NY, she was the daughter of Darwin and Viola (Baker) Tierney. She was married to William J. Bell on Sept. 3, 1983 in St. Joseph’s Church, Malone by Rev. George Tobin. Tootsie graduated from Franklin Academy and North Country Community College. She was employed as a secure care treatment aide at Sunmount DDSO in Tupper Lake until she was forced to retire due to health issues after 23 years of service. She was a member of the Burke Fire Department Ladies Auxiliary where she was active for many years. Tootsie loved to dance and shop but most of all spoiling her grandchildren. She was an amazing woman, mother, grandmother and was a true friend. She is survived by her husband, William of 34 years; two daughters, Kammy Bell-Jeror and her husband, Trevor of Churubusco, Katie Bell-Brown and her husband, Chris of Burke; grandchildren Hanna, Lila, Johnny and one on the way; her mother, Viola of Malone; two sisters, Linda Sullivan of Malone, Kathy Johnston and her husband, Bob of Kernersville, NC; two brothers, Martin Tierney of Malone, Joseph Tierney of Malone; six brothers-in-law and sisters-in-law, Christopher Bell, Debbie Bell-Ningen, Michele Bell-Goodrich and her husband, Alan, LeeAnn Bell-Boose and her husband, David, Pammy Bell-Heath, Tracy Bell-Buckman and her husband, Marcus; several nieces, nephews, great-nieces and nephews and great-great-nieces and nephews. She was predeceased by her father, Darwin; a sister, Patricia Tierney; her mother-in-law, Lila Bell; her father-in-law, William Bell and brother-in-law, John Sullivan. There are no calling hours. A celebration of Tootsie’s life will be held on January 5, 2018 at 1 p.m. at the Burke Fire Station. Donations in her memory may be made to the Burke Fire Department Ladies Auxiliary.

The family of Mrs. Darlene "Tootsie" Bell created this Life Tributes page to make it easy to share your memories.

Send flowers to the Bell family.