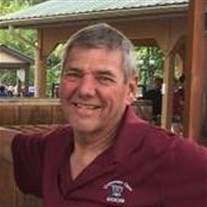 David “Hucky” Paul Patnode, 66, of Chateaugay, died Wednesday, September 11, 2019 at his home with his loving wife by his side and aided by Hospice of the North Country. Born on August 29, 1953 in Malone, New York, he was the son of Francis Harold and Janet (Jarvis) Patnode. He was married to Denise Abbott on March 30, 1974 at St. Patrick’s Church, Chateaugay by Rev. Paul Worzcak. Hucky graduated from Chateaugay Central School. He was a skilled carpentry and cabinet maker, owning and operating Dave’s Woodcraft for forty years. He was a communicant of St. Patrick’s Church, Chateaugay. Hucky was an avid hunter, golfer, NASCAR and NY Yankees fan. His favorite times were spent with his grandchildren and watching them play sports. Hucky is survived by his wife of 45 years, Denise; a daughter and son-in-law, Angela and Tommy Taughran of Pearl River, NY; a grandson and granddaughter, Thomas and Kylie Taughran of Pearl River, NY; his father, Francis (Frank) Patnode of Chateaugay; two brothers and a sister-in-law, Leland (Lee) Patnode of Chateaugay and Richard (Ricky) and Joanne Patnode of Merrill; a sister and brother-in-law, Linda and Hank Manor of Chateaugay; mother-in-law, Dorothee Abbott of Chateaugay; three sisters-in-law, Darlene Abbott (Mark Rottier) of Malone, Donna and Daphne Abbott (Wayne Knecthel) of Chateaugay; a brother-in-law, Daniel Abbott of Chateaugay; as well as several nieces, nephews, great nieces and great nephews. He was predeceased by his mother, Janet Jarvis Patnode and his father-in-law, Charles (Charlie) Abbott. Calling hours will be held at the Chateaugay Funeral Home on Saturday, September 21, 2019 from 11 a.m. to 1 p.m. A prayer service will immediately follow in the funeral home chapel at 1 p.m. In honor of Hucky’s love for the NY Yankees, family and friends are welcome to wear a Yankee shirt or hat to the service. Donations in Hucky’s memory may be made to Hospice of the North Country and the Chateaugay Fire Department. A reception will immediately follow the services at the Chateaugay Rec Park to celebrate Hucky’s life.

The family of Mr. David "Hucky" Paul Patnode created this Life Tributes page to make it easy to share your memories.

Send flowers to the Patnode family.