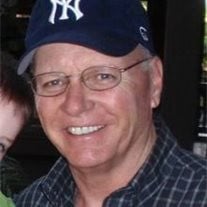 David J. LaPoint, 65, of the Shutts Road, Merrill died Monday, Feb. 1, 2016 at CVPH Medical Center, Plattsburgh, NY surrounded by his loving family. Born in Plattsburgh, NY on Nov. 14, 1950, he was the son of Bernard and Mildred (Bond) LaPoint. He was married to Noreen Shusda on June 27, 1970 in St. Bernard's Church, Lyon Mountain. Mr. LaPoint was employed at the Plattsburgh Air Force Base for 22 years from 1973 to 1995. He was then employed for Clinton County Highway Dept. and Lyon Mountain Correctional Facility, retiring after 14 years of service. He was a communicant of St. Bernard's Church, Lyon Mountain and charter member of the Knights of Columbus #7215, Lyon Mountain. He was a devoted husband, loving father and papa. His grandchildren were the highlight of his life. He enjoyed nothing more than watching them play sports, and gathering together on Sundays. Mr. LaPoint is survived by his wife of 45 years; a son, David J. LaPoint Jr. and his companion, Tammy Daust of Plattsburgh; two daughters and sons-in-law, Shelly and Stephen Peryea of Altona, Marjorie and Chris Peryer of West Chazy; eleven grandchildren, Kyle, Taylor, Kolbee, and Lacee LaPoint, Emilee Collins, Stephen, Emily and Abby Peryea, Avery Durgan, Caleb and Reese Peryer; three sisters and and brothers-in-law, Nancy Legault of South Carolina, Betty and Ronald Glennon of Altona, Sandy and Leonard Tallman of Colton; six brothers-in-law and sisters-in-law, Francis and Sandy Shusda of Vermont, Michael and Patricia Shusda of Vermont, Daniel Shusda of Plattsburgh, JoAnn Shusda of Plattsburgh; many nieces and nephews including, a special nephew, Jarrod Shusda and his family, Lori and Jarrod Jr. He was predeceased by his parents; a brother, Richard LaPoint, and a sister, Patsy Welch. Calling hours will be held at St. Bernard's Church, Lyon Mountain on Friday, Feb. 5 from 10 am to 12 noon. A Mass of Christian Burial will immediately follow at 12 noon with Rev. Bill Edwards officiating. A reception will follow at the Lyon Mountain American Legion.

David J. LaPoint, 65, of the Shutts Road, Merrill died Monday, Feb. 1, 2016 at CVPH Medical Center, Plattsburgh, NY surrounded by his loving family. Born in Plattsburgh, NY on Nov. 14, 1950, he was the son of Bernard and Mildred (Bond) LaPoint. He... View Obituary & Service Information

The family of Mr. David J. LaPoint created this Life Tributes page to make it easy to share your memories.

Send flowers to the LaPoint family.