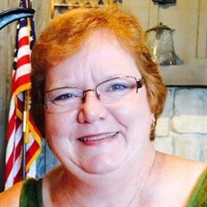 It is with deep sadness that we have to say goodbye to our dearest Debbie. She was a strong woman with a lovely heart, who lost her courageous battle to cancer at Massachusetts General Hospital surrounded by her beautiful family. Our Debbie is now in heaven working for God, he has asked her to provide love, kindness, and understanding to loved ones she left behind. Her selflessness made our Christmas Season joyful and memorable even while she was so ill. She was so glad to be with us during this joyous time. Debbie's legacy began on June 13, 1955. She was born in Malone as a gift from God to Albert and Margaret (Johnson) Ashlaw. Debbie attended school in Burke, NY, Graduated from Franklin Academy, Malone, NY, and attended Empire State College. On March 31, 1973 she married the love of her life Greg G. Demarse at Notre Dame Church, Malone NY by Father Dennis Dupree. They were happily married for nearly 46 years. Debbie's love for children was her passion as she worked as an early childhood educator for nearly 35 years. She touched many young lives during her tenure. She especially enjoyed talking to past students or receiving a big hug from a little one. She truly loved her job! She was blessed with two wonderful children and their spouses who stayed by her side during this difficult time. She is survived by a daughter, Vicki (Demarse) and son-in-law, Todd Giroux of Plattsburgh, NY and a son, GJ and daughter-in-law, Nicole (Degon) Demarse of Plattsburgh, NY. She was also blessed with three beautiful grandchildren, who she loved and cherished so much, Troy and Logan Demarse and Abigail Giroux. She is survived by her brother, Richard Ashlaw and his wife, Hedy of Victor, NY and her sister, Phyllis Smith of Malone; two sisters-in-law, Virginia Ashlaw of Williamson, NY, Linda Ashlaw of Burke, NY; brothers-in-law and sisters-in-law, Len and Edie Demarse of Malone, NY, Chris D. Winterbottom of Cadyville, NY and Rick and Lizza Demarse of New Hampton, NY. She is also survived by many nieces and nephews, who she loved dearly. She was predeceased by her parents, Albert and Margaret Ashlaw; mother-in-law and father-in-law, Emile and Lucille Demarse; siblings, Paul and Theresa Marlow, Ken and Lorriane McCabe, Dick and Rita Durham; brothers, Darrell Ashlaw, Donald Ashlaw; sister-in-law, Sis Ashlaw and brother-in-law, Kieth Smith. Calling hours will be held at St. Mary and Murphy Wilcox Funeral Home in Malone from 4 to 7 p.m on Friday, January 11. A Mass of Christian Burial will be celebrated at 10 a.m. on Saturday, January 12 at Notre Dame Church, Malone, NY. In lieu of flowers, donations in Debbie's memory may be made to St. Jude Children's Research Hospital or the Westville Volunteer Fire Department.

It is with deep sadness that we have to say goodbye to our dearest Debbie. She was a strong woman with a lovely heart, who lost her courageous battle to cancer at Massachusetts General Hospital surrounded by her beautiful family. Our Debbie... View Obituary & Service Information

The family of Mrs. Debra L. Demarse created this Life Tributes page to make it easy to share your memories.

It is with deep sadness that we have to say goodbye to our dearest...

Send flowers to the Demarse family.