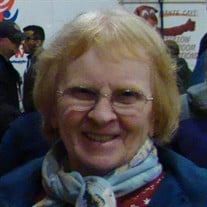 Diane Katherine Lagree, 77, of Churubusco passed away after a courageous battle with Melanoma Cancer on March 28, 2020 at CVPH with her family by her side. Diane was born on November 1, 1942, the daughter of the late Philip and Gertrude (Robinson) Ryan. She graduated from Chateaugay Central School and attended Our Lady of Victory Secretarial School. She was married to Lawrence Lagree on October 13, 1962 in St. Patrick’s Church, Chateaugay by Rev. James Igo. Diane was employed at JCEO for 34 years as the Town of Clinton Coordinator. She had a passion for helping people and was kind, generous, and loving to all who knew her especially “her” people in Churubusco. In 1986, she along with 8 other town citizens formed the Churubusco Senior Citizens Corporation. They bought the town schoolhouse and renovated it into 8 apartments for local seniors. In 1988, the group was awarded the Eleanor Roosevelt Award in Washington DC. She managed the Churubusco School House Apartments until her death. Diane had a love for history which she shared with her mentor and friend, Evelyn Watson. After Evelyn’s death, she was named town Historian. She worked closely with Evelyn’s daughter Geri Favreau on the Town of Clinton exhibit at the Clinton County Historical Association. On opening day, Diane was in her glory as residents of Busco, past and present enjoyed the exhibit and got to reunite with one another. Diane’s faith was deep and she was a very active parishioner at the Immaculate Heart of Mary Church. She taught religious classes, was a member of the Altar Rosary Society and was a coordinator of the cemetery. One of her favorite spring activities was putting flags on the Veteran’s monuments and making sure the cemetery was ready with plants and such for Memorial Day. Although she had a “strong dislike” for politics, she was the Republican Committee Chairman, a founding member of the Churubusco Firemen’s Auxiliary (working endlessly at field days and dinners), and a member of the Home Bureau. Diane is survived by her husband of 57 years, Lawrence Lagree; her greatest accomplishment, the “Lagree girls,” her daughters, Debbie and Marshall Bushey Jr., Mary and Brian Rabideau, Lori and Richard Vachon and Melissa and Gary Peryea. Her presence will be missed by her grandchildren who were the light of her life. She never missed a game, recital, graduation, or anything special in their lives, Justin and Carrianne Bushey and their children, Jake, Brody, and Drew, Sarah and Katherine Bushey, Matthew and Lucas Rabideau, Brandon and Kyle Vachon, and Cody Peryea. She also leaves her brother, Gerald and Helen Ryan, and her sister, JoEllen Leclair and several nieces and nephews whom she loved dearly. Meeting her at heaven’s gate are her siblings, Jean Grimshaw, John Ryan, Gordon Ryan, and Eileen Godin along with her mother-in-law, Virginia Lagree. Due to the current health restrictions in place with COVID-19, services will be held at a later date. Donations in her memory may be made to the Churubusco Fire Dept.

Diane Katherine Lagree, 77, of Churubusco passed away after a courageous battle with Melanoma Cancer on March 28, 2020 at CVPH with her family by her side. Diane was born on November 1, 1942, the daughter of the late Philip and Gertrude (Robinson)... View Obituary & Service Information

The family of Mrs. Diane Kathrine Lagree created this Life Tributes page to make it easy to share your memories.

Diane Katherine Lagree, 77, of Churubusco passed away after a...

Send flowers to the Lagree family.