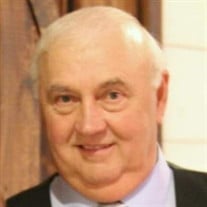 Donald D. Rowe, 69, of Chateaugay died Thursday, May 12, 2022 at the Adirondack Medical Center, Saranac Lake. Born on July 10, 1952 in Albany, NY, he was the son of Donald and Jeannette (Boulerice) Rowe. His father predeceased him. He was married to Lori A. Cowan on July 30, 2009 in Chateaugay by Rev. Joy Shaffer. Donnie graduated from Mooers High School. He owned and operated Don’s Car Crushing for over 35 years. He was a communicant of St. Ann’s Church, Mooers Forks. He loved riding his side by side and helping his daughter and son-in-law make maple syrup. He cherished spending time with his children and grandchildren. He is survived by his wife, Lori; his mother, Jeannette Rowe; a daughter and son-in-law, Jodie and Bobby Trombley; two sons and their wives, Adam and Demi Cook, Andrew and Kailei Cook; six grandchildren, Haley, Aubrey, and Braylin Trombley, Hazel, Brier and Lydia Cook; brother and sisters, Sue Brooks, Jane and Donald Manor, Betty and Edward Bushey Jr., Gary and Julie Rowe, Paul Rowe, Debra and Alan Cardin, Barbara and Dennis Phillips, Karen and Terry Delaney, Linda and Alton Parker, Sandy and Francis Duquette, Randy and Heidi Rowe, Keith and Julie Rowe, Donna and Brian Kavanaugh; his mother-in-law, Beverly Cowan; brothers and sisters-in-law, Steve and Arlene Cowan, Penny Cowan, Tammy and Wally Dumont, Gary Cowan, Danny and Jackie Cowan; as well as many nieces and nephews. Besides his father, he was predeceased by two brothers, Jimmy and Alan Rowe; a nephew, Darcy Manor; and his father-in-law, Wayne Cowan. Calling hours will be held at the Chateaugay Funeral Home on Sunday, May 15, 2022 from 2 p.m. to 6 p.m. A Mass of Christian Burial will be celebrated at 10 a.m. on Monday, May 16, 2022 at St. Patrick’s Church, Chateaugay. Burial will take place at the Earlville Cemetery, Chateaugay. Donations in his memory may be made to a charity of the family’s choice.

Donald D. Rowe, 69, of Chateaugay died Thursday, May 12, 2022 at the Adirondack Medical Center, Saranac Lake. Born on July 10, 1952 in Albany, NY, he was the son of Donald and Jeannette (Boulerice) Rowe. His father predeceased him. He was married... View Obituary & Service Information

The family of Mr. Donald D. Rowe created this Life Tributes page to make it easy to share your memories.

Send flowers to the Rowe family.