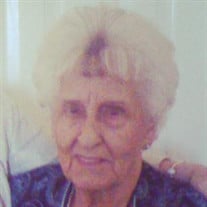 Doritha Tourville Fisher peacefully passed away surrounded by family at her home in Acworth, GA. on December 31 at 3:18 in the morning. She was 91 years old. Doritha aka “Gram” was born in the North Country on September 9, 1925. She was one of eleven children born to Eugene Tourville and Lucy Nichols Tourville. She grew up in Ellenburg, N.Y. She lived, with her family, in Rochester, N.Y. for a number of years where she worked for Eastman Kodak. After retirement, she relocated to Lakeland, Fl and spent her summers at her home on Chateaugay Lake. She had lived in Georgia full time since 2009. Doritha was an avid reader, played card games, board games and was an amazingly fast jigsaw and crossword puzzler. She was an active member of her local parish wherever she lived. Doritha served on the board of her retirement park in FL for many years, and was a member of The Red Hat Club while she lived in FL. Doritha was a faithful servant of our Lord. She prayed for each of you daily. Her faith and salvation was very important to her. She didn’t miss mass even if it had to be from her bedroom. She is being buried with a rosary from the Vatican in Rome that was brought to her by family members. Gram loved people and had a wonderful sense of humor. She loved to travel and made many good memories with family and friends. She was much loved and will be truly missed. Doritha was preceded in death by her father, Eugene Tourville; her mother, Lucy Nichols Tourville; her brothers, Raymond Lagasse, Leo Tourville, Earl Tourville, Carl Tourville, and Norman Tourville; her sisters, Evangeline Whalen, Leona Dupuis, Jeannette Van Slyke and Ada Zangari; and her son Vincent Victor Fisher. Doritha was survived by her two daughters, Barbara Spinner and Marie Smith. Gram was also survived by 8 grandchildren and 17great grandchildren that made her very proud. Gram’s greatest joy in her life came from time with her family. Doritha’s family will celebrate her life with joint memorial and funeral services for her and her son Vincent who passed peacefully at the hospital surrounded by family in Akron, OH on December 20, 2016. The joint services will be as follows: A memorial service will be held at the Chateaugay Funeral Home on January 13, 2017 from 4pm to 7pm. The joint funeral service will be held on January 14, 2017 at 11am located at St. Edmund’s Church in Ellenburg NY. A reception for friends and family of Doritha and Vincent will be held following the funeral at the Ellenburg VFW. We would like to give a special thanks to Collins Funeral Home in Acworth, GA; Bert and Emily Wilcox of Chateaugay Funeral Home and the fine Nurses of hospice care who provided a wonderful and compassion filled end to Gram’s life at home. In lieu of flowers, donations in her memory may be made to St. Jude Children’s Research Hospital.

Doritha Tourville Fisher peacefully passed away surrounded by family at her home in Acworth, GA. on December 31 at 3:18 in the morning. She was 91 years old. Doritha aka &#8220;Gram&#8221; was born in the North Country on September 9, 1925.... View Obituary & Service Information

The family of Mrs. Doritha Tourville Fisher created this Life Tributes page to make it easy to share your memories.

Send flowers to the Fisher family.