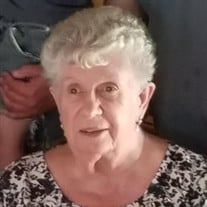 Dorothy A. King, 84, of State Route 11B, North Bangor died Friday, September 4, 2020 at her home surrounded by her loving family under the care of Hospice of the North Country. Born on June 27, 1936 in Malone, NY, she was the daughter of Thomas and Anne (Hill) Lucey. Her first marriage was to Charles King who predeceased her. Her second marriage was to Wallace “Pete”King in 1993. He predeceased her on Sept. 23, 2012. Dorothy graduated from Saranac Lake High School. In her early years, she was employed for Liberty Mutual, Boston, Ralph Cardinal Insurance and John Murphy Insurance. She then worked for Baker’s Air Force Gas which provided propane delivery for 8 years. For 30 plus years, she worked with her husband as the bookkeeper and service coordinator for Pete King’s Plumbing and Heating where she scheduled drivers and service work orders for customer repairs. Dorothy was a communicant of St. Augustine’s Church, North Bangor. She enjoyed bowling and belonged to a league at Lucky Strikes in Malone for many years. She also enjoyed spending time at her condo in Pigeon Forge, TN. Dorothy loved spending time with her family. She is survived by two children, Jeffrey King and his companion, Dawn Winters of North Bangor, Dawn Compeau of Brushton; two step-children, Sheila Hargrave of Malone, Floyd King of Malone; brothers and sisters, Jane LaPage of Moira, Leona Wheeler and her husband, Malcolm of Dickinson, Donna Prue of Moira, Thomas Lucey of North Bangor, James Lucey and his wife, Barbara of North Bangor, Danny Lucey and his wife, Marcy of St. Regis Falls, Dicky Lucey and his wife, Lorna of St. Regis Falls; several grandchildren, great-grandchildren, nieces and nephews. Besides her husbands, she was predeceased by her parents; a daughter, Tina Dufrane and a brother, William Lucey. Visitation will be held at St. Mary’s Church, Brushton on Thursday, Sept. 10 from 10 to 11 a.m. A Mass of Christian Burial will immediately follow at 11 a.m. Due to current health restrictions, those in attendance are asked to observe the use of face masks and social distancing. Burial will take place at St. Augustine’s Cemetery, North Bangor. Donations in her memory may be made to the Office of the Aging, Malone.

Dorothy A. King, 84, of State Route 11B, North Bangor died Friday, September 4, 2020 at her home surrounded by her loving family under the care of Hospice of the North Country. Born on June 27, 1936 in Malone, NY, she was the daughter of Thomas... View Obituary & Service Information

The family of Mrs. Dorothy A. King created this Life Tributes page to make it easy to share your memories.