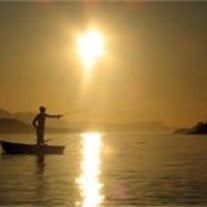 Douglas L. Carter, age 54, of County Route 54, Brainardsville, died unexpectantly on Saturday, June 1, 2013 at his home. Born in Malone, NY on September 11, 1958, he was the son of Leonard and Gilberta (Douglas) Carter. Douglas attended Chateauguay High School and graduated in 1976. After graduating, Douglas worked as an apprentice meat cutter for IGA grocery. He later worked in construction for Luck Brothers and Green Island Construction. Doug enjoyed the great outdoors and was a master fisherman and hunter. He was an accomplished gardener and planted large vegetable gardens each summer. His beautiful vegetables and vegetable stand will be missed this summer by many. Douglas enjoyed his family and home. To say that he was a good cook would underestimate his abilities. He enjoyed cooking for his family and friends and made many tasty gourmet dishes which were enjoyed by so many. His home, backyard and gardens are a reflection of the care and endless time he gave of himself so passionately. Douglas was a friend to many and could find good in even the most difficult situations. Douglas was predeceased by his brother, Mark Carter; father, Leonard Carter; and nephew, Michael Carter. Survivors include his life partner, Cindy Stevens and her children; Mark Stevens of Chateaugay, NY, and April Stevens of Fort Myers, Florida, and her children, Jaden and Willow. Douglas also leaves behind his mother, Gilberta Carter of Brainardsville; uncle and aunt, Robert and Roberta Douglas of Amhurstview, Ontario, and several extended family members of the Carter and Dumont family. A graveside service will take place at the Brainardsville Cemetery on Thursday, June 6, 2013 at 11 am. Following prayers at the graveside, a reception will be held at the Chateaugay American Legion.

The family of Mr. Douglas L. Carter created this Life Tributes page to make it easy to share your memories.

Send flowers to the Carter family.