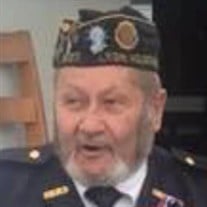 Edward A. Siskavich, 79 of standish Road, passed away on April 9, 2020 at his home in Lyon Mountain, NY after an intense four month battle with renal failure/intestinal cancer. He was born in Plattsburgh, NY on February 23, 1941, the son of Bernard C. and Eva (Kaska) Siskavich. Edward graduated from Lyon Mountain High School where he attended grades 1 through 12 and only missed one day of school. He served in the US Air Force and received an honorable discharge. He was also awarded the Good Conduct Medal during his assignment in the Civil Engineering Group while in the USAF. He married Priscilla Golovach on October 9, 1965, at St. Bernard’s Church in Lyon Mountain. Edward worked in the Buildings & Grounds department at SUNY Plattsburgh for 32 years…he was a true rebel working at the college while his five brothers worked in Corrections. A lifelong resident of Lyon Mountain, Edward lived life to the fullest, always had a smile and a snarky comeback. He was a communicant of St. Bernard’s Church where he sat in the last pew on Saturdays but was upfront to sing in the choir and recited the rosary before mass on Sundays. He was a member of the Sorrell-Woodward American Legion Post 1623 Firing Squad as well as past commander of the legion and the St. Bernard’s Knights of Columbus Council #7215. He was a huge fan of channel surfing bouncing between EWTN religious shows then flip over to Ridiculousness followed by a Hallmark movie (spoiler alert 99% of the time they kiss 2 minutes before the movie ends). He was an avid hunter and outdoorsman with far more tales than trophies and thoroughly enjoyed hunting with all his brothers and nephews with a firm belief in the saying "What goes on in hunting camp, stays in hunting camp." He had his daily routine faltered when he got sick…multiple trips to the post office, local convenience store and Monday/Saturday trips to the landfill convenience station to harass the workers and catch up on town news were like clockwork. Always willing to lend a helping hand, he would jump in wherever he could including snowy treks to fetch cars out of ditches at all hours. Friday night dinners were a weekly trek to Guma’s with Priscilla, Bob and Elsie Golovach (his family wants to extend their apologies to his favorite waitress Kelly for his constant picking on her.) He provided comedic relief right to the end with some of his comments and antics to his family and nursing staff. He is survived by his wife Priscilla, his daughter Victoria and his grandson, Ty Jones; brothers Francis Siskavich, Robert Siskavich and William and Patricia Siskavich; brothers-in-laws Robert Golovach, Anthony and Carol Golovach, James and Patricia Golovach, Michael and Mary Golovach, John and Sue Golovach and sister-in-law Anita Golovach. He leaves behind a large extended family on the Siskavich and Golovach sides. He had special ties to his nephew Scott Siskavich - who filled the spot of the son he never had, brother-in-law John Golovach and grandson Ty Jones. He was predeceased by his parents, his daughter Theresa Siskavich, brothers Bernard J., Felix and Joseph Siskavich and his godson Todd Golovach. Several members of both the Siskavich and Golovach families also predeceased him. Due to social distancing practices: there will be no calling hours and a memorial service will be held at a later date with burial in the parish cemetery. In lieu of flowers, his family would appreciate if you would arrange to donate to local food shelves in your areas to help those struggling during these uncertain times or donations may be made to the Hospice of the North Country 358 Tom Miller Road, Plattsburgh, NY 12901 in his memory. Arrangements are with the Chateaugay Funeral Home. If you ever need a pen, tell Bert at the funeral home Eddie sent you. A legacy is etched into the minds of others and the stories they share about you.

Edward A. Siskavich, 79 of standish Road, passed away on April 9, 2020 at his home in Lyon Mountain, NY after an intense four month battle with renal failure/intestinal cancer. He was born in Plattsburgh, NY on February 23, 1941, the son of... View Obituary & Service Information

The family of Mr. Edward A. Siskavich created this Life Tributes page to make it easy to share your memories.

Edward A. Siskavich, 79 of standish Road, passed away on April...