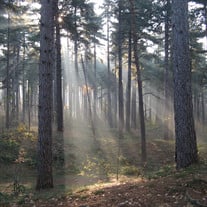 Edward J. Taylor, “Sitting Bull”, 78, of Mill Street, Burke, died Wednesday, January 3, 2018 at the Alice Hyde Medical Center, Malone. Born on February 10, 1939 in Fort Covington, NY, he was the son of Theodore and Marion (Slyman) Taylor. They predeceased him. He was married to Elizabeth “Betty” Tavernia on November 27, 1965. He enlisted in the United States Army and was honorably discharged. He was a member of the Chateaugay American Legion Post 817. He worked for many years as a laborer for the Town of Burke Highway Department before retiring. He was member of the Burke Fire Department for 40 years. He was an avid fisherman and hunter. He enjoyed playing horseshoes, darts, softball, golf and bowling as well as riding his snowmobile. He is survived by his wife of 52 years, Elizabeth; a son, John E. Taylor; a daughter, Tammy Soulia and her companion Rickey French; 3 grandsons, Derek Cook and his wife Danielle, Ryan Soulia and his companion Brandi Hernandez, Darren Taylor; a granddaughter, Allison Taylor and her companion Michael Tallman; a great-grandson, Camden Tallman; 2 brothers, Dick Taylor and Ted Taylor; 4 sisters, Minnie Taylor, Shirley Tavernia, Mary Cook and Thersea Shatlaw. Besides his parents, he is predeceased by 4 brothers, Frank Taylor, Al Taylor, Lloyd Taylor and Carl Taylor. Calling hours will be held at the Chateaugay Funeral Home on Thursday, January 11 from 3 p.m. to 6 p.m. A funeral service will immediately follow at 6 p.m. in the funeral home chapel with Deacon Brian Dwyer. Donations in his memory may be made to the Burke Fire Department. Arrangements are with the Chateaugay Funeral Home. Online condolences may be offered at www.chateaugayfuneralhome.com.

The family of Mr. Edward J Taylor created this Life Tributes page to make it easy to share your memories.

Send flowers to the Taylor family.