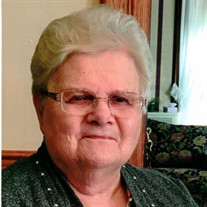 Eileen Burns passed away on November 30, 2020, secure in her faith and with the thoughts of a family who loved her deeply. The cause was complications of Covid-19. Eileen had been a resident of the Farrar Home since the death of Bernard, her husband of 67 years in 2014. She transitioned to the Alice Center in 2018 where she was a resident until her death. Born Margaret Eileen Normile on March 25, 1927 in Ogdensburg, NY, she was the third of Frank and Ann (Mahoney) Normile’s five children. Her early years, like many of her peers, were marked by the privations and struggles of the Great Depression. She was a graduate of St. Joseph’s Ursuline Academy in Malone, NY. After graduation, together with a friend from childhood, she embarked on a journey of religious vocation with the Ursuline Sisters of the Eastern Province in New Rochelle, NY. While her life path would eventually move away from taking religious vows, her faith remained a steadfast and unwavering element in her life. Her many friends knew Eileen as demure and possessing a moral compass always pointing to compassion and empathy for others. In 1947, she was joined in holy matrimony to Bernard Burns of Helena, NY. She joined New York Telephone, a legacy company of Verizon Communications, as a telephone operator in 1949. She held that position until her retirement in 1981, concluding 32 years of uninterrupted service to the company. While not the custom for the time, she raised six children while pursuing full-time outside employment, this when options and resources typically available today were either nonexistent, or beyond the reach of most women. Eileen was active in both faith and civic organizations. Including, but not limited to, the Altar and Rosary Society of St. Joseph’s Church, a parish she and Bernard were communicants for over 65 years. In retirement, the local election board could always count on her support. Poll work was important, and she took great pleasure in re-connecting with friends and acquaintances separated by distance and time. It was during this time she and Bernard alternated between summers in Malone and winters in Stuart, FL., all the while taking delight in their grandchildren and great-grandchildren. In addition to Bernard, she was predeceased by her parents and two siblings: Joan Hurley and Robert Normile. She is survived by a sister, Therese Kelly of Ogdensburg, NY and a brother, Jack (Joy) Normile of Brasher, NY; a sister-in-law, Katherine Foley of Massena, NY; her children, JulieAnn Bartalo (Bart) of Canton, NY, Patricia Bianchet (Paul) of Granby, CT, Charles Burns (Helen) of Lake Mary, FL, Rosemarie Shatraw (Kenny) of Malone, Madonna Burns of Albany, NY and Barry Burns of Alpharetta, GA; ten grandchildren; 14 great-grandchildren; one step-grandchild; one great-great-grandchild; many nieces and nephews. A Mass of Christian Burial will be celebrated at 12 noon on Saturday, Sept. 4 at Notre Dame Church. Burial will take place at St. Joseph's Cemetery, Lake Titus Road, Malone. Donations in her memory may be to the Malone Callfiremen.

Eileen Burns passed away on November 30, 2020, secure in her faith and with the thoughts of a family who loved her deeply. The cause was complications of Covid-19. Eileen had been a resident of the Farrar Home since the death of Bernard, her... View Obituary & Service Information

The family of Mrs. Eileen Burns created this Life Tributes page to make it easy to share your memories.

Send flowers to the Burns family.