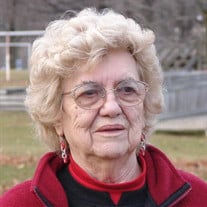 Eileen M. LaVine, 94, of Marion St., Malone died Sunday, Nov. 22, 2020 at the Alice Hyde Medical Center, Malone. Born on March 31, 1926 in Chasm Falls, NY, she was the daughter of William and Rosalie (Bourcier) Conners. She was married to Paul A. LaVine on Sept. 6, 1948 in Chasm Falls. He predeceased her on December 24, 2002. Eileen graduated from St. Joseph’s Academy, Malone. In her early years, she was employed as a secretary for a legal firm. After having her children, she returned to work at the Malone Bronze Powder Company. Later she served as the secretary for the Alice Hyde Hospital administrator. She was then employed by the Youth Corp and retired from Franklin County Social Services as business manager. Eileen was a communicant of Notre Dame Church and a member of the Elks Auxiliary and the Alice Hyde Auxiliary. Eileen enjoyed playing card games, especially bridge and belonged to the Bridge Club. She also enjoyed reading and was a sports enthusiast who enjoyed viewing a variety of activities. She had an excellent sense of humor and was devoted to her granddaughters. She is survived by a daughter, Paula Walter of Malone; three sons and two daughters-in-law, Scott and Doreen LaVine of Norwood, Dean and Donna LaVine of Malone, and Neal LaVine of Burbank, CA; five granddaughters and their spouses, Karen and Richard Bond of Dunn Loring, VA, Amy LaVine of Malone, Erin and Jeff Lackey of Tampa, FL, Kerry Walter and her companion, Cary McCallister of Vienna, VA, and Katelyn Walter of White Plains, NY; two great-grandchildren, Alex and Jade Lackey and a soon to be born great-grandson, Caden McCallister; a sister, Iris Matthews of Kingman, AZ and many nieces and nephews. Besides her husband, she was predeceased by her parents and six brothers, Joseph “Bill”, Lawrence “Red”, Alfred “Ted”, Arthur “Art”, Michael “Mick” and James “Jim” Conners. Due to current health restrictions, services will be private and at the convenience of the family. A celebration of life will be held at a later date. Donations in her memory may be made to Hospice of the North Country.

Eileen M. LaVine, 94, of Marion St., Malone died Sunday, Nov. 22, 2020 at the Alice Hyde Medical Center, Malone. Born on March 31, 1926 in Chasm Falls, NY, she was the daughter of William and Rosalie (Bourcier) Conners. She was married to Paul... View Obituary & Service Information

The family of Mrs. Eileen M. LaVine created this Life Tributes page to make it easy to share your memories.

Send flowers to the LaVine family.