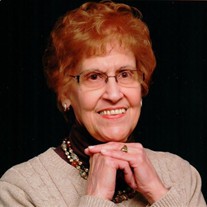 Eleanor T. Maneeley of Malone died Tuesday, Jan. 30, 2018 at the Alice Hyde Medical Center, Malone. She was born in Owls Head, NY on Jan. 26, 1934, the daughter of the late Napoleon and Gertrude Gravel Benware. She graduated from Franklin Academy in Malone in 1953. She was married to Allen Raville in 1953. She was later married to Carl Maneeley in Sept. 1981. He predeceased her in 1997. Mrs. Maneeley was employed at the Sherwin Williams Company from 1965 to 1981 as credit manager and later as assistant manager. From 1981 to 1997, she worked at North Country Community College as book store manager. She was a communicant of Notre Dame Church and was a member and officer of Catholic Daughters of the Americas, Court Ave Maria. She is survived by four children and their spouses, David and Daisy Raville of Malone, Carolyn and Keith Johnson of Greenville, SC, Lori and David Hughes of Malone, Kevin and Lorie Raville of Chateaugay; grandchildren, Jason and Shelly Raville of Morrisonville, Kenneth Johnson of Greenville, SC, Kristen Johnson of Boston, MA, Dean Johnson of Greenville, SC, Lindsey and Nathaniel Chapman of Malone, Lauren Hughes of Malone, Andrew and Neil Raville of Chateaugay; great-grandchildren, Anastasia Raville, Tanner and Mackenzie Chapman; a sister, Valda Perham of Ludlow, MA; a sister-in-law, Maureen Benware of Malone; two step-daughters, Linda Raymond and Betty Saxton; many nieces and nephews. Besides her parents and husband, she was predeceased by three brothers, Harwood, Wesley and James Benware and a step-son, Kenneth Maneeley. Calling hours will be held at St. Mary-Murphy-Wilcox Funeral Home on Friday, Feb. 2 from 5 to 7 p.m. A Mass of Christian Burial will be celebrated at 10 a.m. on Saturday, Feb. 3 in Notre Dame Church, Malone. Burial will take place in the spring at Notre Dame Cemetery. Donations in her memory may be made to Holy Family School.

Eleanor T. Maneeley of Malone died Tuesday, Jan. 30, 2018 at the Alice Hyde Medical Center, Malone. She was born in Owls Head, NY on Jan. 26, 1934, the daughter of the late Napoleon and Gertrude Gravel Benware. She graduated from Franklin Academy... View Obituary & Service Information

The family of Mrs. Eleanor T. Maneeley created this Life Tributes page to make it easy to share your memories.

Send flowers to the Maneeley family.