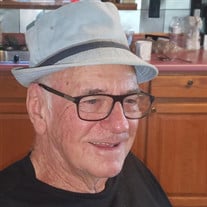 Erwin Lyle Cowan, 88, of the Earlville Rd., Chateaugay died Monday, Aug. 30, 2021 at his home with his family by his side and aided by Hospice of the North Country. Born on Sept. 9, 1932 in Chateaugay, NY, he was the son of Alfred and Mildred (Rhinehart) Cowan. In his early years, he was employed at the St. Lawrence Seaway and the Missile Base. Erwin owned and operated Cowan’s Landscaping and Excavation. He was the first person to have a chainsaw in the North Country and he would sell and service them. He also built and operated ESO gas station and repair shop in Burke. He raced snowmobiles for Moto-ski and won the Championship in 1969-1970. He is currently being considered for Eastern Snowmobile Hall of Fame in Lancaster, NH. He was a member of the Chateaugay United Methodist Church and past member of the Burke Fire Dept. Erwin loved playing cards with his friends and spending time with his family at his camp where he made his famous pancakes for many breakfasts. Erwin is survived by his children, Christine and Jim Mueller of Earlville, Kyna Dupree of Massena, Connie Cowan and Richard Hayes of Florida, Cheri and Tom Welch of Constable, Brenda and Lee Rivers of South Glens Falls, Donna and Dennis Perry of New Mexico, Fay and Keith Palmer of Burke; 19 grandchildren; 35 great-grandchildren; 11 great-great-grandchildren; a brother and sister-in-law, Earl and Virginia Cowan of Chateaugay; five sisters-in-law and two brothers-in-law, Beverly and Marie Cowan, June Cook, Marlene and Lloyd Russell, Sandra and Dennis Morse; his companion, Lou Bowen of Burke; many nieces and nephews. He was predeceased by his wife, Myrna of 64 years; his parents; two sons, Kevin and James; three grandchildren, Tracy Cook, Kevin Cayea and Dennis Perry Jr.; four brothers, Lawrence, Wayne, Glen and Alvin; two sisters, Virginia Van Wormer and Vera Ives; six brothers-in-law and sisters-in-law, Irving Cook, Richard Cook, Ardith Durkee, Vennita Cook, Gweneth Thompson and Edmund Cook. Calling hours will be held at the Chateaugay Funeral Home on Saturday, Sept. 4, 2021 from 1:30 p.m. to 2:30 p.m. A memorial service will immediately follow at 3 p.m. at the Earlville United Methodist Church. Burial will take place at the Earlville Cemetery. A celebration of life will be held following the burial at Erwin’s camp. Donations in Erwin’s memory may be made to the Earlville Cemetery Association or Hospice of the North Country.

Erwin Lyle Cowan, 88, of the Earlville Rd., Chateaugay died Monday, Aug. 30, 2021 at his home with his family by his side and aided by Hospice of the North Country. Born on Sept. 9, 1932 in Chateaugay, NY, he was the son of Alfred and Mildred... View Obituary & Service Information

The family of Mr. Erwin Lyle Cowan created this Life Tributes page to make it easy to share your memories.