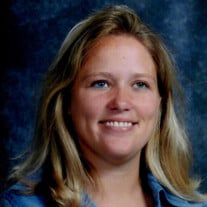 Erynn Chatland Vondell was born July 24, 1974 and died April 27, 2020. Erynn came into this world early and left this world far too soon. She is survived by her husband, Robert Vondell who she married on Aug. 13, 2005; her parents, Bradley and Tamara Chatland; a brother, Joseph Chatland; her paternal grandparents, Frank and Marion Chatland; maternal grandparents, Walter and Dorothy Smallman; aunts and uncles, Dorie and Charlie Trinque, Evie and Alan Chatland, Elizabeth Chatland, Rick and Clarissa Chatland; her mother-in-law, Mary Helen Vondell; her father-in-law, Ken Vondell and his wife, Mary Lou Vondell; brother-in-law Stacy Bilow and nephew, Sullivan Bilow. Her brother-in-law, David Vondell and sister-in-law, Suzanne Bilow predeceased her. Erynn graduated in 1992 from SRCS with a regent’s diploma. Later in 1996, she graduated from SUNY Potsdam with a BA and MA. While at Potsdam, she was on the equestrian team and was the first student to qualify for Nationals in Fort Collins, Colorado. She also became the coach of the equestrian team. At graduation from Potsdam, she was awarded the Maxy Molnar Award which honors the top academic and athletic student. Upon graduation from Potsdam, she became a 5th grade teacher at SRCS. She taught for 19 years until her health demanded she retire. During her teaching career, she especially enjoyed teaching the Greek myths. Throughout her life, she was an accomplished horse woman, coach, trainer and judge. One of her greatest memories was a photo she cherished of her friend, Crystal and her with President Bill Clinton. In 2005, she married the love of her life, Robert (Bobby) Vondell. Together they created a wonderful life. Their home was always an open and welcoming place for their many friends and family to enjoy. She loved their two doodle dogs, 4-wheeling, boating and traveling the world along with enjoying weekends in Montreal and Ottawa. Playing cards with her Gramma Marion was a favorite pastime. Erynn always put everyone’s feelings ahead of her own. Her infectious smile will be remembered by all who knew her. It was a smile that lit up everywhere she went. Her contagious laugh will never be forgotten. Her friends began a posting site to support Erynn called For the Love of Erynn. She received over 1,000 posts from all 50 states, seven countries and three Canadian provinces. Erynn fought silently against Cystic Fibrosis with the strength of a strong and determined warrior. In 2018, she received a double lung transplant at Brigham and Women’s Hospital in Boston. Sadly, as time went on, she needed a second transplant which was not to be. Erynn requested no calling hours and a private graveyard service. A summer “Tribute to Erynn” will be held at a later date. A special thank you for everyone who participated in the Love of Erynn parade of cars. Donations in lieu of flowers and food may be made to the ASPCA, Cystric Fibrosis Foundation or Brigham and Women’s Hospital, Boston.

Erynn Chatland Vondell was born July 24, 1974 and died April 27, 2020. Erynn came into this world early and left this world far too soon. She is survived by her husband, Robert Vondell who she married on Aug. 13, 2005; her parents, Bradley and... View Obituary & Service Information

The family of Mrs. Erynn Chatland Vondell created this Life Tributes page to make it easy to share your memories.

Send flowers to the Vondell family.