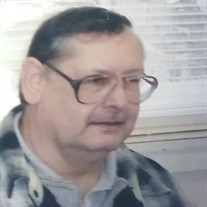 Eugene W. Reome, 67, of Constable died Tuesday, Jan. 4, 2022 at his home. Born on Feb. 6, 1954 in Malone, NY, he was the son of Eugene and Rena (Downer) Reome. He was married to Mary Brownell on June 20, 1998 in Malone. Eugene graduated from Franklin Academy. He was employed by Tru-Stitch until they closed and he then became employed by the Franklin County Nursing Home, retiring in 2006. He enjoyed playing the piano, guitar and singing in local bands including the Old Timers Band, Playboys and Country Addition. Eugene loved fishing, hunting, bowling and going to the casino. He is survived by his wife, Mary of 23 years; three children, Eugene “Fuzzy” Reome of Brushton, Christina Reome of Rochester, Jason Reome of Rochester; two brothers, Wayne Reome and his companion, Rebecca Brewer of Westville, David Reome of Malone; three sisters, Joan Reome and her companion, Jim King of Malone, Tammy Martin and her husband, Billy of Malone, Lisa Reome and her companion, Steve Lamica of Malone; several grandchildren, nieces and nephews; many brothers-in-law and sisters-in-law. He was predeceased by his parents; three sisters, Eva Lamica, Brenda Rouselle, and Marie Pritchard and a brother, Lee Reome. A celebration of Eugene’s life will be held at the Constable Fire Station on Saturday, Jan. 22 at 12 p.m.

The family of Mr. Eugene W. Reome created this Life Tributes page to make it easy to share your memories.

Send flowers to the Reome family.