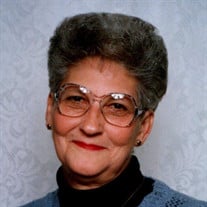 Florence Shirley Silver Blow, “Sis” passed away on Thursday, May 25, 2022 just as the sun was peeking over the horizon to a new day. She has gone home to be with the love of her life “Bill” William Blow. Sis was surrounded by her loving family and courtesy of Hospice of the North Country and North Country Home Services. She was born on July 13, 1935 in Burke, NY, the daughter of the late Charles and Seamonne (Ouimet) Silver. Florence graduated as a class member of 1953 from the old Chateaugay High School at the end of Church St, in the village of Chateaugay. She started her working career at Peterson’s Ice Cream Shop where she met her husband Bill and they were united in marriage on July 17, 1953 by Rev. Morris Dwyer. Bill and Sis enjoyed 66 years of married life together. At one time, Sis was employed at Alix’s 5-10-25 cent Store, part time at Chateaugay Macadam Cheese and Chateaugay Central School. Sis and Bill became managers of Barcomb’s Furniture on Lake St. which later they owned. They went on to be proprietors of Blow’s Grocery on Upper Lake St. from 1975 to 1984. She worked a time at Franklin County Nursing Home and retired as an account clerk from Adult Protective Services, Franklin County in 1997. Sis’s greatest joy was her family, her children, grandchildren and great grandchildren, her friends, and her French-Catholic heritage faith. Her hobbies included reading, crossword puzzles, playing cards and bingo, and she had a great love for flowers, especially roses. A highlight of their married years for Bill and Sis was their trip to the Grand Ole Opry in Nashville, Tennessee. Sis recalls the tickets purchased for their seats were so high up, the performers on stage looked like ants, but the show was fantastic! Survivors include three sons, Lawrence Blow (Rose Arno) of Ellenburg, Gerald and Janice Blow of Chateaugay, Randy and Jeri-Lyn Blow of Malone; a niece and goddaughter who was like a daughter, Sharon Silver LaFlesh of Chateaugay. Her loving grandchildren, William C. (Billy) Blow, Candi Johnston (J. Staib), Kendra and Nathaniel Campbell, Krystal Blow (James Alexander), Heather and Taylor Artus, Curtis Blow (Olivia Wood); 13 great grandchildren; a brother-in-law, Richard Whalen; a sister-in-law, Gina Blow; and many loving nieces and nephews. Besides her husband and parents, she was predeceased by an infant son, Garry Joseph; her siblings, brother, Linus Silver, brother and sister-in-law, Lester and Phyllis (Totty) Silver; a sister, Mary Dale Whalen; a niece and goddaughter, Debra Whalen Walker; a special nephew who was like a son, Roland (Ron) Miller Jr.; a grandson, Mathew Johnston; a special uncle who was like a brother, Walter Ouimet; and a very special friend, Patricia Landry. Very special care was given to Sis making it possible to stay in her home among family and friends. First and foremost, her daughter-in-law, Janice who cared for “Grammie” with great love and devotion each and every day. Her wonderful caregiving team of Sally, Diane, Bonnie, Kylie and Tracy. Their kindness and compassion was priceless! Special thanks is given to Dr. Bhagat and staff, Dr Hurwitz, Sister Mary and Hospice of the North Country, Father Tom, Deacon Brian and communion minister Sharon Malette for their kindness and professionalism. There will be no calling hours. A Mass of Christian Burial will be celebrated at St. Patrick’s Church, Chateaugay on Tuesday, May 31, 2022 at 11 a.m. with Rev. Thomas Kornmeyer officiating and assisted by Deacon Brian Dwyer. Burial will be held in St. Patrick’s Cemetery, Chateaugay. Donations in Sis’s memory can be made to Chateaugay Fire Department, St. Patrick’s Church or Chateaugay Central School Needy Kids Fund.

The family of Mrs. Florence "Sis" S. Blow created this Life Tributes page to make it easy to share your memories.