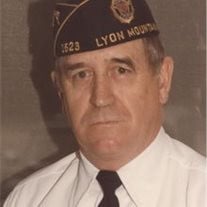 Floyd J. Brooks, 91, of the North St., Lyon Mountain died Thursday, Oct. 17, 2013 at his home surrounded by his loving family and Hospice of the North Country. Born in Forest, NY on April 20, 1922, he was the son of Henry and Minnie (Pelkey) Brooks. He was married to Gloria Conley on October 11, 1943. She predeceased him on April 25, 2004 after 60 years of marriage. Mr. Brooks graduated from Altona Central School with the Class of 1941. He served from 1944 to 1946 in the U.S. Army 16th Armored Division in France, Germany and Czechoslovakia. In May of 1945, his division liberated Plzen, Czechoslovakia. He received the Combat Infantry Badge and Bronze Star. Mr. Brooks became employed for Republic Steel in Lyon Mountain and Mineville for 31 years, retiring in 1972. He then became employed for Imperial Paper Mill for 11 years, retiring in 1984. He was a NYS Certified Assessor for the Town of Dannemora for 17 years, a charter member of the Lyon Mountain Volunteer Fire Dept. for 33 years, commander of Sorrell Woodward Post 1623 and member of the Firing Squad, manager of the Lyon Mountain Miners, member and president of United Steel Workers Union Local 3533 in Lyon Mountain. He was also a member of the Knights of Columbus, Little Camp Hunting Club, and the Lyon Mountain and Altona Correctional Facility Community Task Force. Mr. Brooks is survived by two daughters and sons-in-law, Donna and Tom Kowalowski, JoAnn and Alex Benware; a son and daughter-in-law, Lawrence and Maxine Brooks; six grandchildren, Jerry, Tom, Alex, Shelly, Josh and Larry and ten great-grandchildren. Besides his wife, he was predeceased by his parents; two sisters, Deanie Sayah, and Margaret Chase; two brothers, Wayne and Harold Brooks. Calling hours will be held at St. Bernard's Parish Center, Lyon Mountain on Sunday, Oct. 20 from 4 to 7 pm. Mass of Christian Burial will be celebrated at 11 am on Monday, Oct. 21 in St. Bernard's Church, Lyon Mountain with Rev. Ted Crosby officiating. Burial will take place at St. Bernard's Cemetery, Lyon Mountain. In lieu of flowers, donations in his memory may be made to Sorrell Woodward Post 1623 Firing Squad or Lyon Mountain Volunteer Fire Dept.

Floyd J. Brooks, 91, of the North St., Lyon Mountain died Thursday, Oct. 17, 2013 at his home surrounded by his loving family and Hospice of the North Country. Born in Forest, NY on April 20, 1922, he was the son of Henry and Minnie (Pelkey)... View Obituary & Service Information

The family of Mr. Floyd J. Brooks created this Life Tributes page to make it easy to share your memories.

Send flowers to the Brooks family.