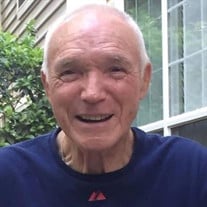 Floyd Earl Cayea, 86, of Tom Miller Road, Plattsburgh died August 18th at home surrounded by his loving family under the care of Hospice. Born on June 9, 1934 in Lyon Mountain, NY, the son of Clifford and Freda (Davis) Cayea. Floyd was one of 13 children raised in Lyon Mountain. He often talked about his childhood and had many happy memories with his siblings. After high school, he and five of his friends enlisted. Floyd wanted to serve his country during the Korean Conflict and received training at the Pentagon before his eight years of proud service to the United States Air Force. He was stationed at Sampson Air Force Base, Sheppard Air Force Base, and Okinawa Kadena Air Force Base. During his stay at Sampson, he met his first wife, Gerry, with whom he had four children. After being honorably discharged in 1959, Floyd brought his wife and family back to Lyon Mountain. He worked for Jenkins‘ Blacktopping, then he became foreman for the missile sites throughout the North Country, mostly site 7 in Chazy Lake. He poured concrete at all the sites in the North Country. After the sites were decommissioned, he did road work with various companies. In 1963, Floyd went to work for Lyon Mountain School and Northern Adirondack Central School after they merged as a maintenance worker and bus driver. He drove 33 years without one accident, retiring in 1996. After retiring from NAC, he went to work for Service Merchandise and Durocher’s Auto, finally retiring again in 2011. Floyd married Christine Andrews on May 26, 2002 and became the “bonus dad” to Eric Normandin, who Floyd loved like his own. Floyd loved to tell a good joke. He adored his family and loved spending time with them, especially Sunday morning coffee. He was an exceptional carpenter and handyman. He also loved to sing and whistle, was an avid fan of the Boston Red Sox, and was always smiling. Floyd was a communicant of St. Bernard’s Church, Lyon Mountain and member of the Sorrell-Woodward American Legion, Lyon Mountain. He is survived by his wife, Christine of 18 years; three daughters, Charlene Yasment and her companion, Neil Pelletier of Plattsburgh, Kathleen Truet and her husband, Ted of Syracuse, Christine Cayea of Farmington, NY; two sons, James Cayea and his companion, Shelly Roulston of Lyon Mountain NY, Eric Normandin of Gardner, NY; David Benjamin, a very special nephew, of Dannemora, NY; grandchildren, Janelle and Brett LaValley of Plattsburgh, Adam Payne and his wife, Elaine of Syracuse, Christine Perez and her husband, Daniel of Syracuse, Brandon Cayea of Plattsburgh; great-grandchildren, Ethan, Bryanna, Madeline, and Luna; two sisters, Jeanne Anne LaMare of Lyon Mountain, Mary Louise Murtha and her husband, Timothy of South Carolina; three brothers, Donald “Joe” Cayea and his wife, Lori of Lyon Mountain, Anthony “Tony” Cayea and his wife, Alice of Lyon Mountain, Patrick Cayea and his wife, Rhonda of Lyon Mountain; several nieces and nephews. Besides his parents, he was predeceased by his first wife Gerry; brothers, Roger, John “Pug”, Fred “Peanut” and Clifford “Bill” Cayea; sisters, Jeannette Miller, Lucille “Lou” Ducharme and Arlene Johnson; nephews, Bradly LaBombard, Steven Cayea; niece, Christine Wood and son-in-law, Robert Payne and several brother and sister-in-laws. Calling hours will be held at the Chateaugay Funeral Home on Friday, Aug. 21 from 11:30 a.m. to 1:30 p.m. In accordance with current health restrictions, those in attendance are asked to observe the use of facial coverings and social distancing. A Mass of Christian Burial will be celebrated following calling hours at 2 p.m. in St. Bernard’s Church, Lyon Mountain. Burial will follow at St. Bernard’s Cemetery. Donations in his memory may be made to Sorrell-Woodward American Legion or Hospice of the North Country.

Floyd Earl Cayea, 86, of Tom Miller Road, Plattsburgh died August 18th at home surrounded by his loving family under the care of Hospice. Born on June 9, 1934 in Lyon Mountain, NY, the son of Clifford and Freda (Davis) Cayea. Floyd was one... View Obituary & Service Information

The family of Mr. Floyd Earl Cayea created this Life Tributes page to make it easy to share your memories.

Send flowers to the Cayea family.