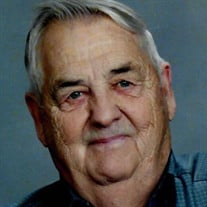 Francis J. Nichols, 88, of Ellenburg Depot passed away Saturday, September 2, 2017 at CVPH Medical Center, Plattsburgh, New York. Francis was born on May 25, 1929 in Ellenburg Center, NY, he was the son of Samuel and Georgianna (Boyea) Nichols. He married Margaret M. Stevens on August 25, 1956 at St. Philomena’s Church in Churubusco, New York. She predeceased him on March 9, 2015. Mr. Nichols served in the First Army, 485 ENGR BN from 1951 to 1953 and remained in the Reserves through 1956. After returning from Germany and his discharge from the Army, he worked on the family farm, was a school bus driver and then was a laborer on the construction of Eisenhower Lock and Dam at the St. Lawrence Seaway. He went to work for many years as a teamster on major projects like the Adirondack Northway. He retired in 1997 after working many years for the Town of Ellenburg. He was a third degree member of the Knights of Columbus, Chateaugay Council #469. He loved to fish, garden and spend time with his grandchildren. He is survived by a son, Daniel J Nichols and his wife Lynn of St. Louis, MO; a daughter, Tina M. Nichols of Strafford, NH; four grandchildren, Jeffrey Nichols and his wife Emily of St. Louis, MO, Laura Terrell and her husband Shawn of Des Moines, IA, Ryan Nichols and his bride-to-be Amanda McConnell of Dallas, TX and Anna Prescott-Nichols of Strafford, NH; a great-grandchild Alexander Nichols of St. Louis, MO; two brothers, Lawrence and his wife Norma and Gerald and his wife Bernadette of Churubusco; a sister Eunice Silver of Ellenburg; as well as many nieces and nephews. He was predeceased by his parents, a sister, Doris and her husband Norman, a brother Clarence and his wife Gertrude and a brother-in-law Lloyd Silver. At Francis’s request, there will be no calling hours. A Mass of Christian Burial will be celebrated at 10 a.m. on Friday, September 8 in Immaculate Heart of Mary Church, Churubusco. Burial will take place at Sheldon Hill Cemetery, Ellenburg Depot. Donations in his memory may be made to Ellenburg Depot Fire Department or a charity of your choice.

Francis J. Nichols, 88, of Ellenburg Depot passed away Saturday, September 2, 2017 at CVPH Medical Center, Plattsburgh, New York. Francis was born on May 25, 1929 in Ellenburg Center, NY, he was the son of Samuel and Georgianna (Boyea) Nichols. He... View Obituary & Service Information

The family of Mr. Francis J. Nichols created this Life Tributes page to make it easy to share your memories.

Send flowers to the Nichols family.