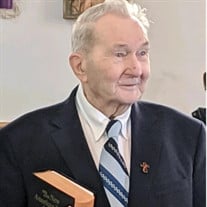 Francis C. Siskavich, “Frenchie”, 94 of Marvin St., Lyon Mountain died Tuesday, February 16, 2021 at his home surrounded by his loving family and under the care of Hospice of the North Country. Born on Oct. 4, 1926 in Lyon Mountain, NY, he was the son of Bernard C. and Eva (Kaska) Siskavich. He was married to Myrtle Pageau on August 12, 1950 in St. Bernard’s Church, Lyon Mountain. She predeceased him on March 29, 2019. During World War II, he and other 16-year-old men worked above ground for Republic Steel after school due to all the men who were serving in the military to help the war effort. He was drafted during his senior year of school and served two years in the U.S. Navy. After returning home, he finished school. Frenchie and other returning WW II vets helped build Sorrell-Woodward Post 1623. He was employed at the Republic Steel Company Store part time as a meat cutter, as a miner for Republic Steel and as a corrections officer for the New York State Dept. of Corrections, retiring in 1988 from Lyon Mountain Correctional Facility. Frenchie was a communicant of St. Bernard’s Church, Lyon Mountain and was ordained as a deacon on October 5, 1985. He was a member of the Knights of Columbus and became a Fourth-Degree member in 1980. He was a true believer and a devout catholic. He was strong in his faith and instilled those beliefs to his family. He actively served in church until the age of 92. He said the Rosary, the Divine Office and Divine Mercy daily. He was a charter member of Sorrell-Woodward American Legion Post 1623 and charter member of the Legion’s Firing Squad beginning in 1946. He was the last surviving WW II veteran from Lyon Mountain. Frenchie was also a former member of the Lyon Mountain Fire Dept. and original member of the Lyon Mountain Mining and Railroad Museum. He was a jack of all trades and master of all. We can’t believe how much we’ve learned from being his nippers. We’ve learned technical terms such as “which a macallits”, “thing a ma jigs”, “doohickies” and other colorful terms, “ain’t that something”, “Holy ole mackinac” and “Jezum to Jezum” (before he became a deacon – sorry Bishop LaValley). He was often the go to man when neighbors needed work to be done on their homes. In his younger years, he was an avid bowler, belonging to leagues in Plattsburgh and Malone. He was an avid outdoorsman and belonged to the Merry Go Round Hunting Club, was “the founder” of Lucky 14 Hunting Club and “hierarchy” of Kerflacken Lodge. He enjoyed trapping, hunting and fishing. At age 73, he went moose hunting in Newfoundland then again at 82 he went elk hunting in Colorado. After his hunting trips to Long Mountain, the kids would look forward to sharing what was left of his giant Hershey candy bar and stick of pepperoni. In recent years though the trips to the woods were less frequent, he made sure the fridge was stocked with peanut butter cups so the grandkids would each get one before they left the house. Frenchie was an inspiration for Myrt’s Maple Products. When he got in the car to go for a ride, he’d say “Are we going left or are we going right?” Left meant he was going to the casino; right meant he was going shopping. He is survived by 13 children; Bernard Siskavich and his wife, Blanch “Teko” of Wanakena, NY, Paula Siskavich of Amenia, NY, Kathleen Young of Lyon Mountain, NY, Anna Morey and her husband, Keith of Ancramdale, NY, Francis Siskavich, Jr. and his wife, Donna of Morrisonville, NY, Margaret Pittman and her husband, Moses of Poughkeepsie, NY, Mary Poitras and her husband, Robert of Ellenburg Center, NY, Rita Benjamin and her husband, Thomas of Mooers, NY, Janet Collins of Plattsburgh, NY, Eva Parsons and her husband, Ronald of Peru, NY, Sandra Derr and her husband, Harold of Altona, NY, Veronica Siskavich-Demers and her husband, Robert of Altona, NY, Peter Siskavich and his wife, Shelby of Cadyville, NY; 30 grandchildren; numerous great-grandchildren; two brothers, William Siskavich and his wife, Patricia of Clayburg, NY, Robert Siskavich of Lyon Mountain, NY; in-laws, Priscilla Siskavich of Lyon Mountain, Leona “Siskavich” Smith and her husband, Warren of Beekmantown, NY, Robert and Mary Pageau of Lyon Mountain, Donald and Jeanette Pageau of Merrill; his lifetime, devoted and faithful friend, Ken Davies of Plattsburgh, NY; several nieces and nephews. Besides his wife, he was predeceased by his parents; four brothers, Bernard “Subby”, Felix, Joseph “Butch” and his wife, Linda and Edward Siskavich; sisters-in-law, Sally Siskavich; son-in-law, Rodney Collins. Calling hours will be held at St. Bernard’s Church, Lyon Mountain on Sunday, February 21 from 2 to 5 p.m. In accordance will current health restrictions, those in attendance are asked to observe the use of face coverings and social distancing. Mass of Christian Burial will be held privately for the family. A public service will take place in the spring at the time of the burial at St. Bernard’s Cemetery, Lyon Mountain. Donations in his memory may be made to Hospice of the North Country or St. Bernard’s Church, Lyon Mountain.

The family of Mr. Francis C. Siskavich created this Life Tributes page to make it easy to share your memories.