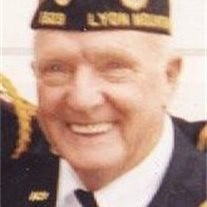 Peanut Cayea, 78, of Standish St., Lyon Mountain died Monday, Feb. 16, 2015 at CVPH Medical Center, Plattsburgh, NY with his loving family by his side. Born in Lyon Mountain, NY on July 31, 1936, he was the son of Clifford and Freda (Davis) Cayea. He was married to Diane Dupraw on July 11, 1957 in St. Bernard's Church . Peanut enlisted in the U.S. Marine Corp in 1953 and was honorably discharged in 1956. He was employed by Republic Steel, Lyon Mountain from 1956 until they closed in 1967. He then worked for many construction companies included Kennedy and Murnane. He was a member and took great pride in belonging to the Lyon Mountain Fire Dept. and the Lyon Mountain American Legion, serving as a member of the firing squad. Peanut really enjoyed being a member of Hunters Home hunting club. He always counted down the days every season until hunting season started. He loved fishing on Chateaugay Lake and especially deep sea fishing with the family on vacations. He enjoyed feeding his birds and pet chipmunks. He loved to go to his brother, Joe's every morning for coffee and enjoyed a good pinochle game after dinner with his family. Peanut always looked forward to his gambling trips to Las Vegas and Atlantic City with his family. Peanut loved a good western and sitting on his front porch listening to good old country music. He enjoyed playing the Jew's harp and looked forward to Friday nights playing volleyball and everyone knew how he never missed a dance at a party. He took exceptional care of his loving wife everyday that ended with a kiss every night. His children had the best dad in the world. He was there for the grandkids, supporting them in every way possible. The great-grandkids will never forget him. He helped so many people in his lifetime and was just and all around great person. he will be missed so very much. Peanut is survived by his wife of 57 years; four children and their spouses, Frederick and Marge Cayea Jr. of Cohoes, NY, Mark and Pamela Cayea of Winterhaven, FL, MonaLee and Mike Siskavich of Lyon Mountain, Tammy Cayea and her fiance, Terry Guynup of Cadyville; three sisters and two brothers-in-law, Arlene Johnson of Lyon Mountain, Jeanne and Norman Lamere of Lyon Mountain, Mary Louise andTim Murtaugh of Florida; four brothers and two sisters-in-law, Floyd and Christine Cayea of Cadyville, Donald "Joe" Cayea and his companion, Lori LaBombard of Lyon Mountain, Anthony and Alice Cayea of Lyon Mountain, Patrick Cayea and his companion, Rhonda McKee of Lyon Mountain; two sisters-in-law, Joan Cayea of Syracuse, DeeDee Cayea of Chateaugay; nine grandchildren and their spouses, Jennifer and Butch Wing, Crystal and Dave Day, Trisha and John Fitzgerald, Michael and Colby Siskavich, Johnathon Cayea, Shane and Kathleen Kosinski, Shawna and Ryan Nelson, Matt Kosinski, Korynn and Kaitlyn Guynup; ten great-grandchildren, Jackson, Butchie, Justin, Jashiah, Mason, Evan, Miranda, Abigale, Shane, and Landon; several nieces and nephews. He was predeceased by his parents; a grandson, Stephen Whalen; a great-grandson, Luke Siskavich; 2 sisters, Jeanette Miller and Lucille Ducharme; 3 brothers, Bill "Clifford", John "Pug" and Roger Cayea. Calling hours will be held at St. Bernard's Church, Lyon Mountain on Friday from 10 am to 12 noon. A Mass of Christian Burial will follow at noon with Rev. Ted Crosby officiating. Spring burial will take place at St. Bernard's Cemetery, Lyon Mountain. Donations in his memory may be made to a charity of one's choice.

Peanut Cayea, 78, of Standish St., Lyon Mountain died Monday, Feb. 16, 2015 at CVPH Medical Center, Plattsburgh, NY with his loving family by his side. Born in Lyon Mountain, NY on July 31, 1936, he was the son of Clifford and Freda (Davis)... View Obituary & Service Information

The family of Mr. Frederick Peanut Cayea, Sr. created this Life Tributes page to make it easy to share your memories.

Send flowers to the Cayea, family.