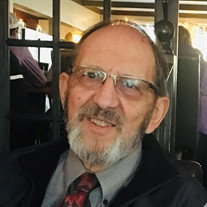 It is with deep sadness that we announce the passing of my husband and our dad, Gabriel James Lopardo, age 83, on Saturday, August 15 at Alice Hyde Medical Center. Gabe was born in Malone, NY, April 11, 1937, the son of the late Gabriel and Melvina Jordan Lopardo. He was one of four children, Vincent (the late Naida), John (Sharon) and Linda (the late Frank) Tunny, who survive. He was the beloved husband of Edith Stevenson Lopardo. They would have celebrated their 60th Wedding Anniversary on October 1, 2020. He leaves to mourn his two daughters and sons in- law, Victoria and David Gardiner, and Jennifer and Derek Sprague; grandchildren, Emily and Warren O’Connor, Hannah and Sarah Gardiner, Alexandra and Davis Sprague; great-grandsons, Luke and Liam O’Connor; brother-in-law and sister- in-law, Bill and Mary Stevenson; sister- in-law and brother- in-law, Sheila Stevenson and Stephen Archibald. He adored his nieces and nephews. Gabe graduated from Chateaugay High School in 1954. After completing Barber School, he joined his father in the business for 65 years. He served in the U.S. Army at Fort Bragg, NC from 1960 to 1962. He served as a Chateaugay Village Trustee from 1978 to1996 and then went on to serve as Mayor from 1996 to 2009. He was a caring and entertaining Chateaugay Central School bus driver for many years. He was a communicant of St. Patrick’s parish for his entire life and a member of American Legion Post 875. Gabe led a faith filled life, devoted to his family, the community and left everyone he met with a chuckle. Calling hours will be Tuesday, August 18, 2020 at the Chateaugay Funeral Home from 3:00 pm to 7:00 pm. In accordance with current health restrictions, those in attendance are asked to observe the use of facial coverings and social distancing. A Mass of Christian Burial will be celebrated Wednesday, August 19 at 1:00 pm at St. Patrick’s Church, Chateaugay, NY. Military Honors will be provided by the Chateaugay American Legion, Post 875 immediately following the Mass at the Post. Private graveside service will take place at a later date at Hillside Cemetery, Hinchinbrook, Quebec. In lieu of flowers, donations to the Chateaugay Historical Society, the Chateaugay American Legion Post 875, or the Chateaugay Fire and Rescue Department.

It is with deep sadness that we announce the passing of my husband and our dad, Gabriel James Lopardo, age 83, on Saturday, August 15 at Alice Hyde Medical Center. Gabe was born in Malone, NY, April 11, 1937, the son of the late Gabriel and... View Obituary & Service Information

The family of Mr. Gabriel James Lopardo created this Life Tributes page to make it easy to share your memories.

It is with deep sadness that we announce the passing of my husband...

Send flowers to the Lopardo family.