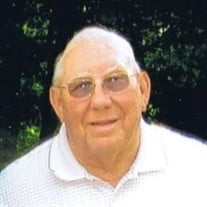 Dr. Garth A. Murray of Buffalo and Bath, NY died peacefully in his sleep while undergoing rehabilitation at Beechwood Continuing Care in Buffalo on October 19, 2020. Although a resident of Bath for more than 60 years, since June 2019, Dr. Murray has been living at The Amberleigh, a senior living community, in Buffalo, NY. Until his retirement 15 years ago, Dr. Murray was a self-employed veterinarian operating a farm animal practice. And for the past 30 years, he also enjoyed spending his winters in Florida, first in Melbourne and then Palm Bay. Dr. Murray, born in Burke, New York on October 7, 1930, was the son of the late Leo and Irene (Bush) Murray. He was a graduate of Chateaugay Central School, where he was the class valedictorian. He then went on to college at Cornell, graduating from its School of Veterinary Science in 1954. It was at that time that he made his way to Steuben County and built a very successful practice. For many years, “Doc” was the manager of the Steuben County Fair and was very active in the New York State Association of Agricultural Fairs. He was an avid collector of antiques and classic cars – taking many trips across county and around town in his vintage autos. Dr. Murray was also very active in the community – he was a member of the Elks – a life member in Bath, NY and an associate member in Melbourne, FL, a member of the Steuben Lodge of the Masons, a member of the Loyal Order of the Moose (lodge in Melbourne, FL), a member of the Antique Automobile Club of America, the Steuben County Farm Bureau, and the American Veterinary Medical Association. He was passionate about his politics in the republican party in Steuben County and although he rarely mentioned it, Garth was a veteran of the United States Air Force. In addition to his parents, Dr. Murray was predeceased by his wife, Jessie, his brothers, Owen and Craig and his sisters, Leta and Donna. He is survived by his sisters, Nina (DJ) Morgan of Chateaugay, and Julia Casey of Hudson Falls, his brother, Glenn (Linda) Murray of Cheyenne, WY, and his sisters-in-law, Myrt Murray of Altamont, NY and Kristine Murray Mack of Williamsville, NY. He is also survived by many nieces, nephews and caring friends. It’s fair to say Garth took great joy in looking after others – a caretaker at heart, be it of family, friends or farm animals. He will be greatly missed. Due to current pandemic restrictions, services will be private at the convenience of the family. Donations in Dr. Murray’s memory may be made to the North Burke Presbyterian Church for the benefit of the Irene B. Murray Memorial Fund or to a charity of ones choosing.

Dr. Garth A. Murray of Buffalo and Bath, NY died peacefully in his sleep while undergoing rehabilitation at Beechwood Continuing Care in Buffalo on October 19, 2020. Although a resident of Bath for more than 60 years, since June 2019, Dr. Murray... View Obituary & Service Information

The family of Dr. Garth A. Murray created this Life Tributes page to make it easy to share your memories.

Dr. Garth A. Murray of Buffalo and Bath, NY died peacefully in...

Send flowers to the Murray family.