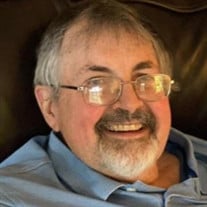 George Ronald Baker II, 64, of Chateaugay Lake died Wednesday, Oct. 6, 2021 at The Alice Center, Malone. Born on Feb. 20, 1957 in Northampton, MA, he was the son of John and Mary Elizabeth (Ornstedt) Baker. George graduated from Lake Placid High School, Lake Placid, FL as the valedictorian of the Class of 1975. He attended West Point Military Academy and graduated in 1979 with a degree in Nuclear Engineering. He served for 21 years with the Army Corp of Engineers, retiring as a Lt. Colonel. Following his retirement, he worked as a civilian engineer for the Dept. of Defense. He greatly enjoyed his retirement on Chateaugay Lake with friends and family for the past six years. Family was very important to George. He was a loving father, son, brother and uncle. He was an honorary grandfather to many of his great-nieces and nephews. He also had a very strong Catholic faith and was a member of St. Bernard’s Catholic Church in Lyon Mountain. He was also a member of the Masons and the Lyon Mountain American Legion Post 1623. He is survived by a son, Brandon Baker of Richmond, VA; his mother, Mary Baker of Chateaugay Lake; four siblings, Lee West of St. Petersburg, FL, John (Karen) Baker of Jupiter Farm, Fl, Kathy (Neil) Seymour of Malone, Timothy (Maggie) Baker of New Orleans, LA; several nieces and nephews. He was predeceased by his father, John Baker; his son, Bryce Baker and a sister, Elizabeth Simmons. There are no calling hours. A Mass of Christian Burial will be celebrated at 11 a.m. on Saturday, Oct. 23 at St. Bernard’s Church, Lyon Mountain. Following Mass, a luncheon honoring George will be served for family and friends at the Lyon Mountain American Legion. Military burial will take place at the Virginia Veterans Cemetery at Amelia at 10 a.m. on Monday, Oct. 25. Donations in his memory may be made to the Hope Lodge, 237 East Avenue, Burlington, VT 05401.

The family of Mr. George Ronald Baker II created this Life Tributes page to make it easy to share your memories.

Send flowers to the Baker family.