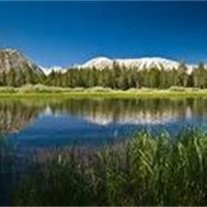 GEORGE F. "PETE" PETERSON, 87, of Owls Head NY died Thursday, January 22, 2015 at Alice Hyde Hospital following a brief illness. Born July 6, 1927 in Malone NY, he was the son of Helmar and Elida Gravell Peterson of Owls Head NY. He married Mary "Mae" White Peterson at St. Augustine's Church, N. Bangor in 1953 and she predeceased him in 2005. They were married 52 years. Surviving is a daughter Penny Peterson of Malone NY and a son and daughter-in-law; Paul and Karen Peterson of Canandaigua NY, three grandsons; Justin, Jordan and Josh, sister-in-law and brother-in-law Peggy and Lenny Smolenski of New City NY, sister-in-law; Dianne White of N. Bangor NY and several nieces and nephews. Besides his parents, he was predeceased by an infant brother; Joseph and sister; Mary Peterson. Pete lived almost his entire life in Owls Head attending grade school there and assisting his father with the family auto garage business as a youth. Before completing high school at Franklin Academy in Malone he enlisted in the Army Air Corps in 1945 and served as a weather observer in Germany. He was Honorably Discharged in 1947 and attended Ferris State College in Michigan to complete his High School Diploma and then Siena College in Albany. Upon his return to Malone following schooling he was employed by Colonial Airlines at the Malone Airport, several years for Marine Midland Bank in various positions to include Branch Manager of the Canton location and a 35 year career for Twinstate Telephone in Plattsburgh NY as the area Sales Manager retiring only a few years ago at the age of 84. He was also a long time Republican Party Committee Member and served as the Assessor for the Town of Bellmont for several terms. He volunteered and belonged to several civic organizations to include being a Charter (Founding) member of the Owls Head Mt. View Volunteer Fire Department, American Legion and Elks Club. His hobbies included reading, crossword puzzles, card playing, fishing and running for exercise. Calling hours will be Tuesday, January 27, 2015 from 4-7pm in the St. Mary-Murphy-Wilcox Funeral Home in Malone. A Mass of Christian Burial will be celebrated Wednesday, January 28, 2015 at 10AM in Notre Dame Church in Malone NY. A spring burial will take place in Notre Dame Cemetery. In lieu of flowers, donations in his memory may be made to the Mt. View Association.

The family of Mr. George Pete Peterson created this Life Tributes page to make it easy to share your memories.

Send flowers to the Peterson family.