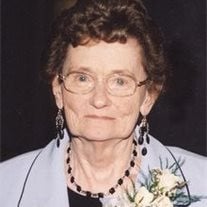 Gertrude "Gert" Eileen (Foran) Hamelin, 88, of Marvin Way, Lyon Mountain died Friday, July 10, 2015 at her home surrounded by her family and Hospice of the North Country. Born in Chateaugay, NY on Feb. 27, 1927, she was the daughter of Charles and Katherine (McNierney) Foran. She was married to Charles "Sonny" Hamelin in St. Patrick's Church, Chateaugay by Rev. Floyd Brown. He predeceased her on Oct. 14, 1970. Gert graduated from Chateaugay Central School. She was then employed as a clerk at Pearl's Department Store in Chateaugay. She took the USPS clerk test and was employed at the Chateaugay Post Office. After marrying Sonny and moving to Lyon Mountain, she became a clerk at the Lyon Mountain Post Office. She retired as Post Master after 37 years of service. Gert was a devoted communicant of St. Bernard's Church, Lyon Mountain and a charter member of the Catholic Daughters of America in Chateaugay. She was a devoted mother, grandmother and great-grandmother who enjoyed family dinners every Saturday night after mass followed by board games and pinocle. She was an avid Yankee fan and enjoyed gardening and the craft club. She also enjoyed reading and was called librarian because of her home was full of books. Gert is survived by three sons and daughters-in-law, Conrad (Joe) Hamelin and Patricia of Daytona Beach, FL, John (Jack) Hamelin and Nancy of Plattsburgh, Gerald (Jerry) Hamelin and Connie of Merrill; a sister, Loretta Foran; a sister-in-law, Jean Chase; five grandchildren, Corey Hamelin and his fiance, Johanna Kaplan, Shawn Hamelin and his fiance, Sarah Marlow, Bethany Bakr and her husband, Hany, Shannon Sequin and her husband, Stewart, Michael Hamelin; six great-grandchildren, Connor and Logan Miller, Rece and Rylie LaFountain, Adam and Liana Bakr; several nieces and nephews including Ann Gerolimatos and Joan Juntunen. Besides her husband, she was predeceased by a brother, "Hap" Edward Foran; sister, Elenor Gillette; sister and brother-in-law, Frances and Major Thompson; brother-in-law, Slavin Chase; two sons, Jamie in 1964 and Jay in 1962 in infancy; and a granddaughter, Kelly Hamelin Miller. The family would like to send a special thank you to Hospice of the North Country and Dr. William Pelton for the care they gave Gert. Calling hours will be held at St. Bernard's Church, Lyon Mountain on Tuesday, July 14 from 1-4 p.m. Mass of Christian Burial will be celebrated at 11 a.m. on Wednesday, July 15 in St. Bernard's Church with Rev. John Looby officiating. Burial will take place at St. Bernard's Cemetery, Lyon Mountain. In lieu of flowers, donations in her memory may be made to Hospice of the North Country or St. Bernard's Church Roof Fund.

Gertrude "Gert" Eileen (Foran) Hamelin, 88, of Marvin Way, Lyon Mountain died Friday, July 10, 2015 at her home surrounded by her family and Hospice of the North Country. Born in Chateaugay, NY on Feb. 27, 1927, she was the daughter of Charles... View Obituary & Service Information

The family of Mrs. Gertrude "Gert" Hamelin created this Life Tributes page to make it easy to share your memories.

Send flowers to the Hamelin family.