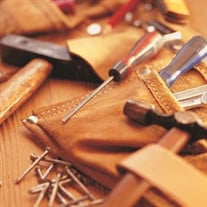 Glen A. Cowan, 82, of Earlville, died Wednesday, April 1, 2020 at the Alice Hyde Medical Center, Malone. Born on November 23, 1937 in Chateaugay, NY, he was the son of Alfred and Mildred (Rhinehart) Cowan. Glen was married to Marie Poupore on June 27, 1964 at the Chateaugay United Methodist Church by Rev. Charles Martin. Glen served in the United States Army and was honorably discharged. He was truly a jack of all trades with a specialty in carpentry and construction. He worked various jobs, driving a truck for Everett Willis, working on the NYS Northway as well as several dam projects. He started working for Franklin County in 1992 as maintenance construction before retiring in 2002. He was a member of the Chateaugay United Methodist Church and the Chateaugay American Legion Post #875. Glen was a true handy man, and could be seen touring Earlville on his four-wheeler with his hammer at the ready to help any neighbor in need. He enjoyed playing cards, Pitch being his favorite, and horseshoes as well as listening to old country music. He was an avid New York Yankees Fan. His favorite of all past times however, was spending time with his family. Glen is survived by his wife of 55 years, Marie; three children, Tony Cowan and his wife, Sheryl of Chateaugay, Elana Hutchins and her husband, Terry of Chateaugay, Brian Cowan and his fiancé, Mina Clark of Rainbow Lake; six grandchildren, Tyler Stonehouse, Zachary Cowan, Bobbi Jo Silver, Michelle Silver, Jeremy Hutchins, Sara Stone; seven great grandchildren; two brothers, Erwin Cowan and Earl Cowan and his wife, Virginia of Chateaugay; a sister, Virginia Van Wormer of Colonie, NY; as well as several nieces and nephews. He was predeceased by his parents; a grandson, Nathan Cowan; three brothers, Wayne, Lawrence and Alvin Cowan; and a sister, Vera Ives. Services will be private and at the convenience of the family. Burial will be held in Earlville Cemetery, Earlville. Arrangements are with the Chateaugay Funeral Home. Online condolences may be offered at www.chateaugayfuneralhome.com.

Glen A. Cowan, 82, of Earlville, died Wednesday, April 1, 2020 at the Alice Hyde Medical Center, Malone. Born on November 23, 1937 in Chateaugay, NY, he was the son of Alfred and Mildred (Rhinehart) Cowan. Glen was married to Marie Poupore on... View Obituary & Service Information

The family of Mr. Glen A. Cowan created this Life Tributes page to make it easy to share your memories.