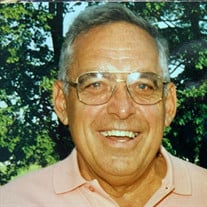 Gordon Henry Langlois, 87, of County Route 25, Malone, passed away peacefully in his home under the care of Hospice of the North Country and surrounded by family after a short illness on Monday, August 2, 2021. Gordon was born on July 21, 1934 in Malone, NY to the late Chester and Myrna (Aubin) Langlois. He was the only son in a family with four other girls. God blessed him. Gordon graduated from Franklin Academy in 1952 and Canton Agriculture and Technology College in 1954. He served in the Navy from 1955 to 1957, where he learned to fly T-34 aircraft and to keep polar bears from getting onto the Navy icebreaker he was assigned to while north of the Arctic Circle. Stories are told. After returning to Malone, Gordon worked as an engineer on the Saint Lawrence Seaway Project. He married Joanne Barlow (Bombay, NY) on August 22, 1959 and eventually moved to Albany where they had four children. After Joanne’s unexpected death in 1972, Gordon returned to Malone, where he would work as a building inspector for the State of New York for more than 20 years. Shortly after returning to Malone, Gordon met Patricia (Sauther) Perry who was also recently widowed with five children. Taking their cues from the two popular shows on TV at the time, the “Brady Bunch” and “Eight is Enough”, Gordon and Pat joined hands in Holy Matrimony on November 24, 1973 and entered uncharted territory with nine young children and a small house with three bedrooms. Gordie and Pat have been inseparable ever since and last year celebrated their 47th wedding anniversary. Gordon will be remembered for the ever-present twinkle in his eye, his incredible cinnamon buns, and his ability to work with his hands to create beautiful designs and structures. There was nothing that Gordie couldn’t build from scratch or fix if it was broken. And more importantly, he could always be counted on to be there to share his skills and lend a helping hand. His was a life well lived filled with many, many loving friends and family. Survivors include his wife of nearly 48 years, Patricia (Sauther) Langlois; nine children, Kathleen (Perry) Eppler (Plattsburgh, NY), Richard and Terry Perry (Malone, NY), Cheryl (Langlois) and Mike Erickson (Brant Lake, NY), Mary Jo (Perry) Homer, (Cumming, GA), Michele (Langlois) and Lou Lung (Westborough, MA), David Langlois (Ellicott City, MD), Michael and Claire Langlois (Falmouth, ME), Tom and Heather Perry (Malone, NY) and Maureen (Perry) and Paul Gazzo (Dawsonville, GA); 25 grandchildren and 16 great-grandchildren. Though there are too many beautiful leaves on this family tree to mention by name, rest assured that they were all individually loved and doted on by Gordon and Pat. Gordon is also survived by three of his sisters: Jane and Richard LaVigne of Malone, Lynn and Patrick Maginn of North Bangor, N.Y., and Phyllis Benware of Malone. Gordon is predeceased by his parents, a granddaughter, Kristin LaGoy and a great-grandson, Michael Reinhardt Eppler, his younger sister and partner in decoration and design, Gail Timmons and a daughter-in-law, Lisa (Hopwood) Langlois. At Gordon’s request, there will be no calling hours. A graveside service will be held at Notre Dame Cemetery in Malone on Saturday, August 7th at 11:00 AM. In lieu of flowers, please consider a donation to the Malone Adult Center. A special thank you to Dr. Anjni Bhagat and to Shannon Cook and Nicole LaClair of the Hospice of the North Country.

Gordon Henry Langlois, 87, of County Route 25, Malone, passed away peacefully in his home under the care of Hospice of the North Country and surrounded by family after a short illness on Monday, August 2, 2021. Gordon was born on July 21,... View Obituary & Service Information

The family of Mr. Gordon H. Langlois created this Life Tributes page to make it easy to share your memories.

Send flowers to the Langlois family.