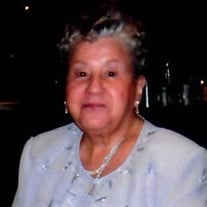 Grace P. Ryan, 89, formerly of Chateaugay and currently residing at the Farrar Home, Malone, died peacefully Tuesday, June 11, 2019 at the Alice Hyde Medical Center, Malone, surrounded by her loving family. Born on October 12, 1929 in Quebec, Canada, she was the daughter of Bazile P. and Florence M. (Ezro) Patenaude. She was married to John G. “Red” Ryan on October 12, 1957 in St. Patrick’s Church, Chateaugay by Father Gallagher. He predeceased her on April 24, 2010. Grace graduated from Chateaugay Central School and business school in Plattsburgh, NY for accounting. She was employed by Gerald Rushford and WIRY Radio as a bookkeeper and worked at Farmer’s National Bank as a bank teller, as well as an auditor for the Chateaugay Health Clinic. For many years, she traveled around the United States with her husband, Red while he served in the United States Air Force. She lived in Georgia, New Jersey, Alaska and New Mexico before returning home to Chateaugay. She was a communicant of St. Patrick’s Church, Chateaugay. Grace loved cooking, baking and gardening. Her greatest joy was caring for her grandchildren and great-grandchildren. She is survived by her three children and their spouses, Patrick and Rita Ryan of Williston, VT, Sharon and Edward Plante of Fort Covington, Lynne and Craig LaBare of Burke; eight grandchildren, Shannon and John Ryan, Louis, Adam and Christina Plante, Chelsea, Philicia and Ryan LaBare; four great-grandchildren, Jeremiah and Jacob Plante, Nathan and Jessica Plante and one more, baby LaBare, on the way. Besides her husband, she was predeceased by her parents; three sisters, Lumina LeClair, Leona Boyea and Lavina Boyea; two brothers, Raymond Patenaude and Ernest Patenaude. Services will be private and at the convenience of the family. Burial will be held at St. Patrick’s Cemetery, Chateaugay. Donations in her memory may be made to St. Patrick’s Church and the American Cancer Society.

The family of Mrs. Grace P. Ryan created this Life Tributes page to make it easy to share your memories.

Send flowers to the Ryan family.