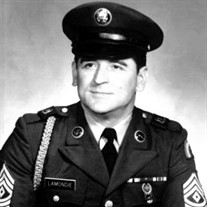 Look out Saint Peter here he comes! On April 26, 2018 Harold “Pal” Lamondie returned home to his mother Cecelia Allen Lamondie and his father Harold Lamondie Senior. He will be happily reunited with his sisters Phyllis Lamondie Charland Lamica, Nancy Lamondie Lane, his brothers Carmen “Peppy” Lamondie, Leslie “Essy” Lamondie and his mother-in-law and father-in-law Marcella and Leon Trombley. Born on November 4, 1938, Pal lived all his Earthly dreams in just 79 years. He served as a police officer, fireman, and spent 34 years in the New York State Army National Guard. He retired as a Command Sergeant Major in 1990 from Company B (-) 2nd BN 108th Infantry, and as Superintendent for the Division of Military and Naval Affairs overseeing Armories in Malone, Saranac Lake, Morrisonville and Ogdensburg in 1999. During his employment at Pearl’s Department Store in Chateaugay, New York he met his wife Nancy Trombley, while fitting her for shoes. Twelve years after their Cinderella story Pal and Nancy were married. With Nancy, Pal raised two children: Lisa Lamondie-Grenville (spouse Steven), and Lan Leon Lamondie. He also provided daily guidance to Cecilia “Cissy” Merrill (life-partner Chad Covey) “favorite brown-eyed granddaughter”, Sigourney Grenville (boyfriend Spencer Hesseltine) “favorite blue-eyed granddaughter”, his firstborn great-grandson, namesake, true pride and joy, Pal Merrill Ryan Covey, followed by Fyn Roy Covey who has his great-grandfather’s tenacity and energy. Pal lived his life by the mantra of the Dalai Lama “Live one day at a time and make it a masterpiece”. He worked hard, played hard, and loved deeply. Pal is known for his leadership, honor, compassion, generosity, and his loving spirit. He enjoyed entertaining and did so with a guitar in hand alongside his musical family. His brother Douglas LaMondie (spouse Carolyn) and sister Lydia “Dale” LaPage (spouse Richard) and dozens of nieces and nephews will keep the musical family tradition alive. Pal was an avid sports fan and athlete. He played baseball, softball, basketball, bowling, golf, horseshoes and shot pool and darts. He was competitive at cards, especially pitch and was known to frequent casinos where he blew his children’s’ inheritance. His love for sports and competition led him to owning and operating Adirondack Cards and Comics for over a decade. He hosted many sports parties, in what family friends Mike Kelley, Larry Hopkinson, Shawn Fournier, and Wayne “Pie” Bush coined as “Pal’s Pub”, also known as his garage, in which never housed a vehicle. He started the first basketball league for children “Minute Man Basketball” in 1972, that took place Saturday mornings at the New York State Armory in Malone. It is quite fitting with his military service, serving as armory superintendent and desire to have children play ball on the “drill hall floor/gymnasium” that his calling hours will be at the New York State Armory, currently the Malone YMCA on Sunday May 6, 2018, from 4:00PM to 8:00PM. A Roman Catholic Funeral will take place at St. Francis of Assisi Church in Constable, NY on Monday, May 7, 2018 at 11 a.m. A 21-gun salute will immediately follow the mass. In lieu of flowers, memorial donations made to the Malone YMCA will further Pal’s legacy of children playing basketball in his second home.

The family of Mr. Harold "Pal" Lamondie created this Life Tributes page to make it easy to share your memories.

Send flowers to the Lamondie family.